Collin Jouan, a midfielder from Bethesda Lions, had an experience that not many soccer players in the world could duplicate. 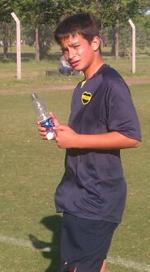 The Maryland-native trained with Boca Juniors academy thanks to a familial connection.

“The opportunity came through one of my father’s friends (my dad [Gonzalo Jouan] is Argentinean, former pro rugby player), who knew that I was very involved with soccer and the level that I was playing in the U.S.,” Collin Jouan told TopDrawerSoccer.com. “At that time, I was playing the Region I tournament with my team, the U14 Bethesda Lions, and he asked me to send my info and a video of me training and playing.”

A couple of weeks later and Jouan, a TDS Combine New York alum, was setting up a date to head to South America to train with the world famous club.

“I went there and spent two weeks training with the 1998 academy team,” he said. “I went through tryouts with a number of players that they brought in from other states from Argentina.”

The teenager said the experience was unbelievable, as he was introduced to the professionalism and quality that is so closely linked with the top academies in the world.

“It was an incredible experience, totally different from the U.S. They provide us with all your training gear daily and it is a very competitive environment, which is the biggest difference with youth soccer in the U.S. – the level of intensity of the players – and the parents are not allowed to watch our training sessions.”

The U.S. youngster did well enough to earn a call back from Boca Juniors, who invited him to train with the club in August. First, he is heading to Netherlands with his club team with three games scheduled and training at Rhoda as well as with the U17 Luxembourg Men’s National Team.

The full-time spot may be some time off though, as Jouan is not an Argentine citizen yet.

“Boca Juniors offered me the opportunity to move to Argentina to join the 1998 Academy team once I get my dual citizenship paperwork in place since they are not allowed to sign any foreign player to their academy program until the age of 18 unless my citizenship is in place.”

Fernando Mercado, a teenager from Texas, recently signed a professional contract with C.F. Merida, according to Hays Free Press.

Mercado told the newspaper that Willie Guaderrama saw him at an indoor game and setup the opportunities for him in Mexico.

The former Lonestar and Classics Elite player impressed scouts at the TDS Dallas combine, but he graduated in 2013 so it was late in the process for many coaches on hand to recruit him.

C.F. Merida finished in fifth place in the Ascenso in 2012, which is the second division of professional soccer in Mexico.

Former U.S. U15 Boys National Team midfielder Gedion Zelalem played most of the second half for Arsenal’s first team over the weekend in a 7-0 win over Indonesian Dream Team.

Zelalem provided a sublime through ball during his spell at center midfielder for the London club. All of his touches from the game can be viewed online.

With his inclusion on the Arsenal preseason trip, the club is clearly showing how highly it rates the talented playmaker.

The 16-year-old is not a U.S. citizen and has appeared for the Germany U16 BNT recently.