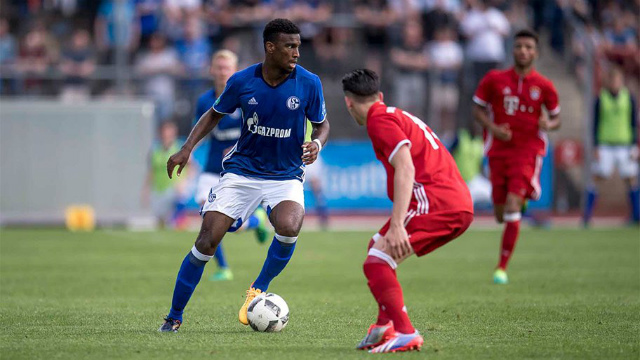 The club season came to an end in a wild and crazy fashion for the trio of Schalke-based Americans on Tuesday.

The spot kicks were needed after Bayern overturned a 3-1 result from the first leg, winning by a 4-2 score over 90 minutes to secure a 5-5 draw over the two legs of playoff soccer.

While the team result wasn’t ideal for the three U.S. youth national team players, all three enjoyed solid performances on the day. McKennie set up Schalke’s opening goal on the day, as Benjamin Goller headed home the midfielder’s long throw-in early on in the first half. The former FC Dallas Academy player enjoyed a strong showing in central midfield, while Taitague and Wright excelled further up the field.

At the time, it extended Schalke’s lead to 4-1 on aggregate, a seemingly safe lead even with time left to play.

But a three-goal outburst from Bayern over a five minute period in the second half tied things up at 4-4. U.S.-eligible forward Timothy Tillmann opened the scoring for Bayern in the 49th minute.

Wright, who looked dangerous for long stretches of the match, popped up to but Schalke back in front on aggregate. In space on the left wing in the 78th minute, he sent in a perfect curling ball that found the head of Luke Hemmerich at the far post to make it 5-4.

However, the Schalke defense couldn’t hold up, and Bayern equalized in the 88th minute to send the game to penalties. Haji Wright held his nerve on the fifth penalty with Schalke down 4-3, but Bayern finished a perfect 5-for-5 to knock out the American trio.

On the other side of the bracket, goalkeeper Will Pulisic was on the bench for Borussia Dortmund, which advanced to the final with a 2-1 win on Monday against Wolfsburg. It signaled the end of the season for McKinzie Gaines, who played the full 90 in the loss.

One of college soccer’s best freshmen in 2016 won’t be back in the NCAA this year.

Lowe departs Virginia after just one season in Charlottesville, where he made 20 appearances (19 starts) and was named to the ACC All-Freshman Team. The central midfielder had little trouble adjusting to college soccer, as the former Timbers Academy player makes the early jump to the pro ranks.