One of the most common pieces of advice that youth players in Europe wish to impart on aspiring U.S.-based talent is to get across the Atlantic as soon as possible.

Well, getting in early to the party will not be the problem for Mani Eftekhari.

The eight-year-old from Northern California is set to join Dinamo Zagreb’s youth academy January, according to his father Rooz Eftekhari.

The giants of Croatian soccer have been very active in adding players from the U.S. in recent months with a handful currently at the academy. Mani’s path is not that different than his older counterparts.

“That came up as total luck,” Rooz Eftekhari told TopDrawerSoccer.com about how Dinamo first saw his son. 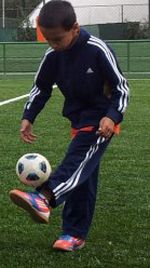 Rooz went on to explain that he received an invite to a camp run by the European club in his Email inbox early one morning during the summer. Without looking too much into the details, he grabbed his son and headed to the event.

When he arrived, he was informed that the camp was supposed to be for 12 and up. Given that Mani, at this time, was only seven; it was a huge difference in physicality, but the attitude and confidence of the youngster did not deter him from taking part.

By the end of the week, Mani had earned the award given out to the best player at the camp, and an invitation from the Dinamo staff on hand to practice with the team over in Croatia later in the year.

In October, Rooz and Mani went over for his trial.

“The coaches didn’t know English at all,” Rooz said. “The first couple of days were rough.”

The head of the Dinamo Academy had a meeting with both Rooz and Mani after the first few days and tried to explain what the coaches wanted and some of the key words for the youngster to learn.

He picked it up quickly and impressed enough to earn a spot on the roster for the scrimmage at the end of the week against a Hungarian team. Mani started as the lone striker in the 7v7 game.

“At the scrimmage was the Director of the Dinamo Academy,” Rooz said. “[After the game], they gave us an evaluation and asked us to join.”

Rooz added that the staff of Dinamo said Mani had to be better than the players currently on the team to make it a worthwhile investment for the club.

Following a week of practice and a game, there was enough evidence to prove he was one of the best players in this age group and the club got the ball rolling for his arrival.

The budding talent will move over with his mother in January. Rooz and his daughter will join them when she finishes the fifth grade in the spring.

Rooz did say that initially there was some resistance from his wife about this huge change at such a young age for Mani, but she eventually came around.

“Our background is Persian, so we are genetically predisposed to have our children become doctors,” Rooz said. “Until Dinamo told her that he could be a world class player, and when that official invite finally came . . . that is when the motherly instincts took over and she was proud of what he could accomplish.”

The move to Europe was not completely out of the blue. Rooz is originally from London and played at a competitive level growing up, so he understands the advantages to being in that environment from an early age.

“If I left him here in the States, it would be a disservice,” he said. “It comes down to what [European Academies] do in development.”

Years of training on a small rug in the family’s home in Oakland, California with a size one ball helped Mani develop a first touch that caught the eye of the Dinamo Zagreb’s scouts in Berkley and coaches from a couple of other academies.

Rooz said there was some interest from Ajax and Barcelona as well, but seeing the Dinamo Zagreb complex and meeting some of the friendly people in Croatia convinced him that it was the right place for his son.

U.S. Youth International Paul Arriola (No. 8 in the IMG Academy Top 150 for the class of 2013) announced on his Twitter account this week that he is headed back to Club Tijuana for another trial.

The former U.S. U17 Men’s National Team standout had a training stint with the champions of Mexico earlier this year.

Arriola’s interest in jumping to the professional ranks is well documented with the 17-year-old telling TopDrawerSoccer.com that he was exploring professional opportunities even during his college recruiting process.

Following a weighted lottery on Tuesday, U.S. U18 Men’s National Team center back Mobi Fehr was awarded to the Portland Timbers.

Fehr is a technically sound player who had a brief stint with FC Basel in 2012. His style of play should fit in well with Caleb Porter’s vision.