Pro Prospects: Goals and a debut in Europe 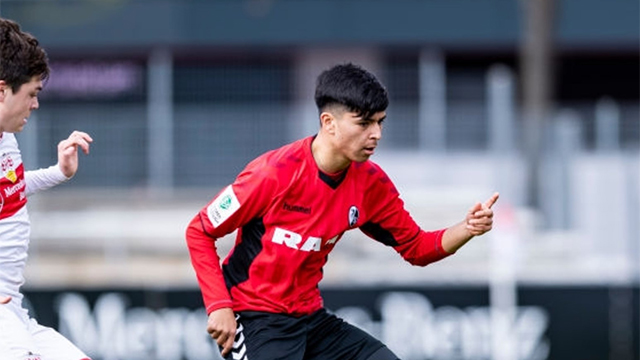 For the contingent of young Americans looking to make a breakthrough in Europe, it was a big weekend.

Forward Sebastian Soto made his first team debut for Hannover 96 (which lost again) as relegation from the Bundesliga looms.

But while that’s covered elsewhere on the internet, it was a banner day for Soto’s U.S. Under-20 MNT teammate Alex Mendez.

Life at SC Freiburg has reportedly been as challenge as one might expect for the silky smooth, left-footed central midfielder. Learning the demands of the defensive work, Mendez finally found time and space to create a moment of magic on Saturday.

Mendez smashed home an outrageous shot from at least 30 yards out, opening the scoring in SC Freiburg’s U19 game against Hoffenheim. When his side conceded twice just before the break, he equalized in the second half. The game finished 3-3, with both goals posted below.

Another weekend with Michael Edwards in the starting lineup for Wolfsburg A-Junioren side, and another win for his squad. The center back remains ever-present in the first XI, helping anchor a 2-1 win against Hannover 96 last Friday.

Christopher Richards was a last-minute scratch for Bayern Munich’s A-Junioren team, but a few players with American ties saw the field in the Bavarian youth side’s 3-3 draw. Tyler Booth came off the bench and played 17 minutes, Justin Butler was a stoppage time sub, and German-American Malik Tillman played the full 90.

While the U.S. Under-17 MNT was in camp over the weekend, Mason Judge remained in Germany as he continues to make a positive impression at Eintracht Frankfurt. The central defender started and went the distance as Eintracht A-Junioren side blanked Ian Hoffmann and Karlsruhrer SC by a 2-0 score.

Speaking of remaining present with his youth side, midfielder Blaine Ferri was once again part of Greuther Furth’s win in the U19 Bayernliga. He played every minute of a 3-0 win over SpVgg Bayern Hof on Saturday.

Two Americans also squared off against each other in the Regionalliga Nord. Isaiah Young and Werder Bremen II clashed against Hannover II, which also featured Chris Gloster at left back. Young and Bremen II triumphed with two first half goals, with Young getting subbed off in the 83rd minute and Gloster out after going 45 minutes.

Outside of Mendez’s brace, the biggest news streaming from Europe was the long-awaited debut for Richie Ledezma at PSV Eindoven. With his team sporting a 3-0 lead, the former Real Salt Lake Academy player entered the fray, nearly getting on the score sheet. It’s a big step for Ledezma as he looks to reach full fitness and make the U.S. U20 World Cup squad.

Sergino Dest started and played the entire match once again for Jong Ajax, which returned to winning ways with a 3-1 victory against Helmond Sport.

Konrad’s Juvenil A side comes up short of league title

The Division de Honor league title was on the line for FC Barcelona’s Juvenil A side. Needing a win and some help in order to secure the crown, Barca got the former but not the latter.

U.S. forward/midfielder Konrad de la Fuente assisted on the opening goal, with Ansu Fati putting Barcelona up 1-0 (clip of the assist is below). De la Fuente put in a 64-minute shift before getting subbed out in the second half, with Barcelona eventually winning 2-1. However, a late winner by Real Zaragoza against Reus secured the league crown for Juvenil A.

Elsewhere in Spain, U.S. midfielder Jude Burst played all 90 minutes in central midfield for Unificacion Bellvitge in a 2-1 win vs Vilaseca CF. Patrick Cassagnol scored for IPC La Escuela, but got sent off for two yellow cards in a 2-1 defeat against Actur Paglo Iglesias. Starting for RCD Mallorca, Akil Watts played 73 minutes on the way to a 2-1 win over Gimnastic de Terragona.

Out for seven months after tearing his ACL during preseason, former U.S. U20 defender Marlon Fossey return to action on the weekend for Fulham. Fossey entered at the start of the second half for Fulham Under-23s, coming into the match alongside fellow Yank Luca de la Torre. Trailing by two goals when the pair entered, Fulham lost the match 3-0 against Reading U23s.

Indiana Vassilev slotted into the starting lineup for Aston Villa U23s, finding the back of the net in the first half only for it to be ruled out due to an assistant referee's flag. He played 60 minutes as Villa took a step closer towards Premier League 2 promotion.