Amar Sejdic, a U.S. youth national team midfielder, is currently a member of the youth academy at the professional Dutch club Vitesse. 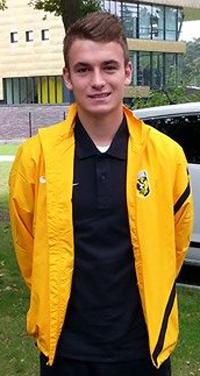 “I am training with them four times a week and Saturday is match day,” Sejdic told TopDrawerSoccer.com. “I’m always being looked at by the Academy Director and the coaches.”

The Kentucky teenager’s move to the club, which is a year-long basis, was facilitated by International PRO Management. The 16-year-old has been there for two months and is already playing with the club’s U19 side.

“I’m staying for a year – that is the plan for now,” Sejdic said about the future. “After that, we will see. It will be a big decision whether I take a professional contract, if it is offered, or explore my options with college soccer and get an education as a back-up plan.”

Sejdic said his current schedule includes school until 2 p.m. when he heads off to the buses and heads to training, which last for two hours.

“I’m usually the first one on the field and the last one off of it,” he said. “I have to get up to the fitness level of the guys who have been here for a while. I’m trying to prove myself against players from across the world.”

The technically gifted, hard-working midfielder said he has not regularly cracked the starting lineup with the Vitesse U19 side, but he is getting minutes. Considering he is one of the youngest players on the roster, it speaks volumes to what the coaches think of Sejdic.

“It was a great experience playing [in a regular season match] against Ajax – one of the most famous clubs in the world,” he said. “I’ve been playing in full friendly matches as well including one against a local amateur first team. This weekend, we face PSV Eindhoven.”

After two months there, Sejdic said that the language has been the most difficult part of the transition.

“I can speak some of the language, but on the field it’s the biggest problem,” he said. “When I am in a game, I still have to understand it and translate it to English – by then, the play is done.”

Beyond the linguistics, Sejdic also pointed out how startling the comparison is for the mentality of the players.

“The kids here are so focused on getting better and being professional – for some kids, all they do is train,” he said. “They are all in on trying to make it [as a professional soccer player.]”

Sejdic has a back-up plan with college and has been to a camp at Maryland where head coach Sasho Cirovski sung his praises and recommended him for the local Training Centers, a U.S. Soccer scouting tool.

Sejdic last appeared with the U.S. in 2011 at a U15 Boys National Team camp. The U18 Men’s National Team is his current age group, and he is hopeful for another look.

He is also planning to make some noise in Florida later this year when he links up with his former club, Rovers Youth Academy, at the Disney Soccer Showcase in Orlando in Dec.

For now though, the midfielder is pretty happy with where he is.

“Vitesse invested $30 million into a new complex a couple of years ago,” he said. “So we have the nicest facilities in the country.”

Emmanuel Dapaa, a sophomore at Gahanna Christian Academy in Ohio, has been offered a try out with one of Manchester United’s feeder clubs according to the Columbus Dispatch.

Dapaa plays his club soccer for Ohio Premier Eagles. He was one of the leading scorers last year in the US Youth Soccer National League Boys U15 with four goals.

This season, he has been on a tear at the high school level with 38 goals and 15 assists, according the Dispatch.

Dapaa was born in Italy to Ghanaian parents, which would make a move to Europe easier but a call up to the U.S. youth national team tricky.

“Emmanuel Dapaa is the best player I've coached and he's one of the top 15 or 20 kids in the country," Lawrence told thisweeksports.com. “He's a dynamic player and our goal scorer, and we're going to rely on him a lot.”

His athleticism is what stands out the most from highlight clips. Dapaa scored a wonder goal earlier this season when he connected on a corner kick to the far post with a perfectly timed bicycle kick. Luckily, there was a fan filming the game.