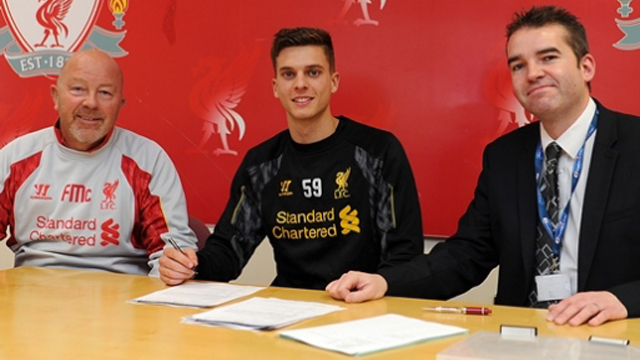 On Monday, Liverpool announced that U.S. youth international Marc Pelosi had signed a contract extension with the club. Pelosi has been on the mend since Feb. 17 when he suffered a “serious broken leg” in a game against West Bromwich Albion. 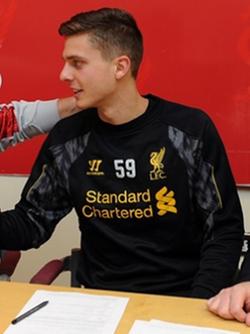 Pelosi joined the English Premier League club in 2011 after impressing a number of clubs with his play as the captain of the U.S. U17 Men’s National Team at the U17 World Cup in Mexico. The former UCLA recruit spurned offers from MLS to try his luck in Europe and seemed well on his way to a bright future with the Reds.

Pelosi featured in the midfield as well as left back with Liverpool’s U21 side in his first few months with the club.

A knee injury in 2012 slowed down his progression through the ranks and kept him off the field for a couple of months. His return later in the season made it appear that he was going to be a key piece for Tab Ramos and the U20 MNT at the 2013 World Cup.

However, the broken leg in February saddled Pelosi with another injury and forced him to miss out on the event with the U20s. The club’s official site said on Monday that the 19-year-old is making “excellent progress” on his rehabilitation.

The next youth event that Pelosi would be eligible for would be the 2016 Summer Olympics in Brazil should the U.S. qualify.

Parfitt, profiled on Pro Prospects in the past, is in the process of acquiring his U.S. citizenship and told the West Ham website in Oct. that he was close to completing the process.

The teenager’s scoring outburst came on his return to the West Ham lineup after missing four games due to injury.

"I thought [Parfitt] played very well, but having said that I wouldn't say we were a one man team today," West Ham coach Steve Potts told whufc.com. "It was very much a team performance and Djair was on the end of some very good team movements, so credit to him.”

Born in 1996, Parfitt is eligible for the next U20 MNT cycle, which is currently in camp in Italy for the first preparation for the 2015 World Cup. The 17-year-old has said in the past that he would like to play for the U.S. national team, but holds the possibility of representing Bermuda as well.