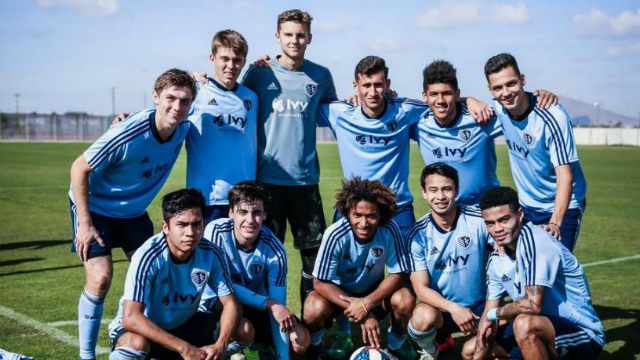 With the draft now in the rearview mirror, MLS preseasons are ramping up around the continent as the preparations for the 2019 season hit a new gear.

It’s a big opportunity for some of the best and brightest players in academies. While another round of Homegrown signings has new pros officially in camp and competing for minutes, preseason also offers a chance for unsigned talent to get an extended look.

Leading the way, to no surprise, is the Philadelphia Union. Part of that is due to the organization’s approach and circumstances. According to the Brotherly Game, a whopping 15 players are in Florida in the Union’s combined camp with their USL side Bethlehem Steel.

That includes class of 2019 prospects like Tonny Temple (NC State), Michael Pellegrino (Notre Dame) and Tomas Romero (Georgetown), who all have Steel appearances on their resume and are destined for big Division I programs later in the fall.

One of the Steel’s opponents in the preseason is D.C. United, slated to face each other later this week in Florida. U.S. U17 MNT forward Griffin Yow has spent time in camp with the team, while Bethesda SC forward Gabe Segal (committed to Stanford) is in Florida with D.C. according to Steve Goff of the Washington Post. Segal's a local standout that's scored eight goals in 11 games for the Bethesda's U18/19 side this DA season. He's played in past Generation adidas Cups as a guest player for DCU's Academy as well.

(Editor's Note: Bryang Kayo, another DCU Academy player, is in Florida with the first team.)

Spending time in Florida along with Philadelphia and D.C., the Impact are bringing a pair of academy players on their current trip: goalkeeper Jonathan Sirois and winger Mikale Fontaine.

NYCFC, which inked midfielder Justin Haak to a Homegrown deal prior to taking off for its preseason in Abu Dhabi, brought five players from its academy side with them. That includes several top players, including Wake Forest recruit Nico Benalcazar, goalkeeper Alex Rando, U.S. U17 MNT midfielder Tayvon Gray, Pittsburgh commit Vejlko Petkovic and Dante Polvara.

There’s a huge contingent of talent traveling with Sounders FC as they prepare for the new campaign. With Sounders 2 players along for the ride, there are a number of faces to sort through on a lengthy roster. There are a handful of unsigned players, no inked to S2 or the MLS die, including Blake Malone, Sam Fowler, Connor Drought and Khai Brisco, all committed to play college soccer in the fall.

Another team that features a number of academy players is Sporting KC. Joining the first team – and USL side Swope Park Rangers – for a large training camp are Brooks Thompson, Sean Karani, Tucker Lepley, Jake Davis and Mo Abualnadi.

Midfielder Edwin Cerrillo is presumed by many to be a potential FC Dallas Homegrown signing, and his presence on the first team preseason roster isn’t going to make that suggestion go away. He’s not the only lone unsigned Academy playoff to be in camp. U.S. Under-20 defender Julian Araujo is on the LA Galaxy preseason roster, and he could be next up to sign a Homegrown deal in the coming weeks. The New York Red Bulls brought defender John Tolkin with them to Florida, a veteran of the recent U.S. Under-17 Men’s National Team camp in Florida.

For the first time in his relatively short professional career, Christopher Richards is set to head out onto the field as a full-fledged member of Bayern Munich. The Bavarian club announced the transfer of the young American center back earlier this month, and the U19 Junioren-Bundesliga is back in action this weekend. Richards and his Bayern side face Ingolstadt on Saturday, February 2.

Resuming the 2018-19 season along with the rest of the Junioren-Bundesliga is forward Sebastian Soto. After spending the winter break training with the Hannover first team in Spain, Soto’s likely to feature with the Under-19s once again. A trip to Havelse, one of the bottom-feeders in the Northeast of the A-Juioren-Bundesliga, should provide ample opportunity for Soto to get back to his scoring ways.

One of the new American faces in Germany is U.S. Under-20 standout Alex Mendez, now on the books at SC Freiburg. He’ll look to make his debut with their U19s this weekend, as they resume the campaign against Karlsruher SC on Sunday.