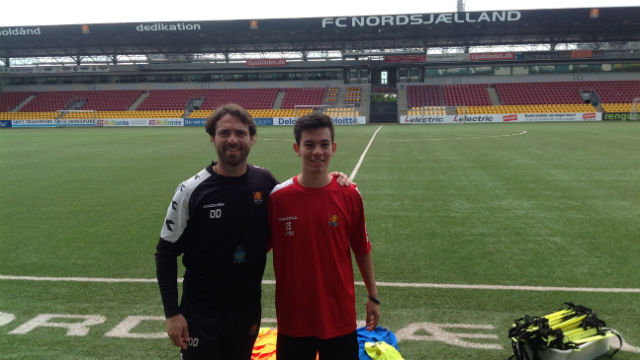 The door to Europe just might be creaking open for San Diego Surf and U.S. U18 MNT midfielder Pablo Pelaez.

The U16 Development Academy standout went on a two-week training stint with Danish club FC Nordesjaelland in mid-May, playing with the U19 team, reserves and first team. 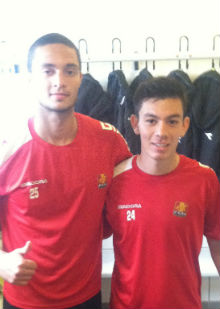 Pelaez, the No. 26 ranked recruit in the class of 2015 and who is verbally committed to UCLA, impressed during his stint and is waiting to hear back from the club about whether or not he’ll get invited back.

“I got there, I [was] a little nervous, but as I got in my first practice with the reserves, I felt very welcomed by everyone there and I did what I needed to do,” he told TopDrawerSoccer.com. “Another good experience when I trained with the first team a couple times, playing with guys who’ve played in the Champions League. Comparing myself to them and seeing that I can practice with them, put my stamp on the game was a good experience.”

As he indicated, Pelaez felt slightly nervous heading into his first training session with the team, with the obvious desire to impress coaches and the players he was competing with. But once he settled in, he was able to put his best foot forward after a few errant passes.

His training sessions with the different squads also gave him to grasp the team’s style of play, something that he enjoyed and felt comfortable with.

The opportunity to develop and play in Europe is something that Pelaez is extremely interested in pursuing, should the option arise. The SoCal native was in Denmark during the summer, when it was a relatively balmy 70 degrees, a far cry from Scandinavia’s harsh winter climate.

Pelaez said that this experience was slightly better than previous trials he’s been on, specifically ones in Mexico – and he also saw his path to becoming a better player in front of him by training and playing at such a high level.

For now, it’s a waiting game for Pelaez, who recently competed at the Development Academy Showcase with his San Diego Surf U16 side.

One of Pelaez’s friends and Surf teammates, Alexis Velela, is in a similar position of looking to make a name for himself at the next level.

The U.S. U17 MNT defender recently trained with Sporting KC for a week at the beginning of June, in what was an eye-opening experience for the 16-year-old.

Velela spent 2013-14 as a member of the U.S. U17 Residency Program, playing as a center back. He hailed the past year of experience and how it has helped him grow on and off the field, and is looking to lock down a spot in next year’s qualifying squad as the U.S. aim to advance to the U17 World Cup in 2015.

“Being [at Residency] for a year was good, because it got the whole team together, living together, playing together every day,” Velela said. “Being together as a team made me feel like we got better as a group. Individually, I think I’ve become better as a player, and outside of soccer too.”

The No. 10 ranked recruit from the class of 2016 is confident in his ability to make an impression in the pro ranks one day.

“I feel like I’m good enough to keep going with soccer and do something with it, I feel like I can make it one day,” he said.

Gyau has represented the United States at a number of different age groups, including the U17, U20 and U23 MNT. He’ll suit up for BVB’s U23s starting in the fall, which is coached by American David Wagner. According to MLSsoccer.com, the deal is for one year.

The pacey flank player spent the last two seasons at Hoffenheim, making to appearances in the Bundesliga, and spending time on loan with 2.Bundesliga side FC St. Pauli.