Pro Prospects: U20 hopeful in Germany 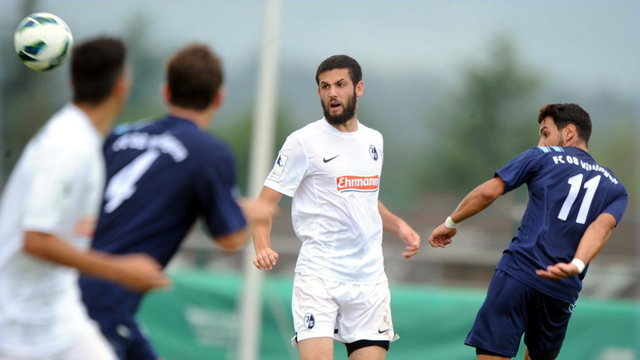 The former FC Dallas prospect is now plying his trade in Germany after SC Freiburg signed him to a deal last year, luring him away from a UCF verbal commitment. The German club inked the talented midfielder with hopes of developing him into a first team contributor. Sonis, also partially hoped the move would help open some doors into the U.S. Youth National Teams.

“Through some contacts from my father, a scout from SC Freiburg recommended me for a tryout,” Sonis said about his arrival at the German club. “I tried several times and finally they offered me a contract. It was not easy because it is a big investment for a German team to sign a foreign player. Many factors and many key things need to align and there are many individuals that get involved in the decision, especially with a team like Freiburg who has a smaller budget than the big teams.”

Sonis, 19 years old, is playing with the club’s reserve team this season, which has opened his eyes to the level in Germany.

“The first game was a little nerve racking I am not going to lie, but once you step in the field, it is like playing back home,” Sonis said. “A big difference is that the Germans put a lot of interest on all the leagues, so at times we may play in a stadium with 4,000 -10,000 people.”

While Sonis is fitting in well with his new club, the transition is has not been entirely easy.

“I think the most difficult part in playing in Germany is adapting to the speed and pressure and the intensity that you play,” Sonis said. “It is 90 min of pure intensity. The biggest difference for me is the mental agility that you need to play at this level. Essentially you have very small time to think, and your decisions need to be consistently correct.”

Sonis pushed himself with the move to Europe, which he is hoping will be enough to earn a call-up to the U.S. U20 Men’s National Team.

“I recently was in touch with people from the USSF and they told me that they aware of me in Freiburg,” Sonis said. “They are closely watching how I progress and fit into the U20 team.”

Sonis believes he could help the squad at the defensive midfield position with his vision and tactical understanding of how to operate in a 4-3-3.

“During the qualifying at times our team did very well, but when we were attacked with a lot of personnel our midfields were better equipped to attack than to defend and that created that hole through the middle where the teams were coming clean into our defense line,” Sonis said. “I think that my work rate, aggressiveness, and defensive skills could have helped to contain the opponents.”

The U.S. is headed to the World Cup in New Zealand this summer with eyes on a better performance than in 2013 when the U.S. only earned one point in a challenging group.

Sonis is hoping that Ramos will continue to keep his eyes open for new players for the squad even with only two months to go before the World Cup starts. The current U20 squad benefitted from the contributions of Tommy Thompson and Cameron Carter-Vickers, who were late arrivals to the program. Sonis believes he could have a similar impact if given the chance.

“The opportunity that the coaches are giving to players like Thompson or Cameron gives me tons of confidence because I can see they are open-minded in trying different things,” Sonis said. “That keeps me motivated and working hard every day for that chance of showing the coaches what I can do to help the team.”

For now, Sonis is plugging away with SC Freiburg II alongside fellow U.S. national team hopefuls Zack Steffen and Caleb Stanko. Sonis, one of the youngest players on the squad, has made four appearances this season for the team that sits in eighth in the Regionalliga Sudwest through 21 games.