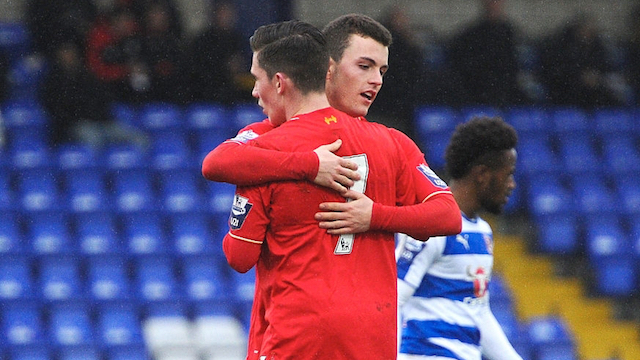 While signing day is a huge occasion for the lucky few soccer players who get to continue playing soccer at the next level, there is a sliver of the elite group of youth players who bypass that step altogether.

Whether it is a foreign academy or a professional contract with one of the domestic leagues, there are a number of players from this graduating class who won’t be signing any paper on Wednesday, but they’ve already locked in their immediate futures with the sport.

Here is a look at how the players from the graduating class of 2016 are faring in their professional endeavors on Signing Day for their class.

Christian Pulisic is the No. 1 player in the IMG Academy Boys Top 150 for the class of 2016. Pulisic made his professional debut over the past weekend with Borussia Dortmund. The 17-year-old came off the bench in a 0-0 game. Dortmund scored twice late to secure the three points, as the teenager looked like one of the most dangerous players on the field. Pulisic looks to have a very bright future ahead of him, which includes a great situation with his club at Dortmund.

Luca de la Torre is the No. 2 player in the IMG Academy Boys Top 150. He has been with Fulham for the past two seasons. He is a regular with the club’s U21 side. He has one goal in nine appearances this season.

Brooks Lennon is the No. 3 player in the IMG Academy Boys Top 150. He is one of the most recent ones to make the jump to a foreign academy. Lennon linked up with Liverpool earlier this season, but he has been sidelined with an injury until Dec. Lennon has come on strong since returning to the field. Lennon scored his first goal of the season this past weekend in Liverpool U21’s 2-0 win over Reading.

Benjamin Swanson signed a Homegrown deal with the Columbus Crew in Oct. of 2014. He is still looking to make his debut with the club. He is the No. 4 player in the IMG Academy Boys Top 150.

Like Swanson, Alejandro Zendejas signed a Homegrown deal in Oct. of 2014. Zendejas inked his future with FC Dallas. The midfielder made eight appearances in 2015 including two starts. He should be in line for more minutes in 2016 as he transitions to being part of the club full time after spending most of last season with the U.S. Residency Program in Florida. Zendejas is the No. 6 player in the IMG Academy Boys Top 150.

Danilo Acosta joined Swanson and Zendejas as Homegrown players from this class in Dec. of 2015. Acosta, previously committed to UCLA(m), could end up as the best defender in the bunch. Acosta went from being the prized prospect of the Bruins recruiting class to the prized prospect of the Real Salt Lake roster. Mason Stajduhar, the No. 4 goalkeeper in the class, is the other player who signed a Homegrown deal. Stajduhar inked a contract with Orlando City in Nov. of 2015.

Daniel Barbir has made two appearances with the West Bromwich Albion U21 side this season. The center defender has been on the bench for the U21 team in the last few games as he works his way back into the rotation after missing a chunk of the season due to the U17 World Cup. Barbir is the No. 7 player in the IMG Academy Boys Top 150.

Haji Wright and Joshua Perez, No. 5 and No. 8 in the IMG Academy Boys Top 150, are in contract limbo as each gets settled into new clubs. Neither will be pursuing the college route. Wright already signed a professional contract with New York Cosmos last season. He is waiting for his 18th birthday before making the official leap to Europe. The Cosmos have also signed Alexis Velela, No. 14, and Eric Calvillo, No. 19, from this class.

Joe Gallardo was one of the first players for this recruiting class to ink a deal with a foreign academy. Gallardo signed with Monterrey in Dec. of 2012. He looked to be one of the most promising players for this class at one point, but bad luck with injuries has slowed down his development in recent years. Gallardo is the No. 10 player in the IMG Academy Top 150.

Christian Albelo (No. 17), Brandon Vazquez (No. 30), Ethan Lotenero (No. 50), Kai Koreniuk (No. 66), and Ivan Gutierrez (No. 74) are with foreign academies, but none have made their professional debuts yet. Matthew Olosunde, No. 22, has not officially joined any academy, but rumors persist of a move to Manchester United. Olosunde turns 18 on March 7.

Pierre Da Silva, No. 18, is taking the USL route with the Orlando City B team. The New York-native has been training with Orlando City since he joined the Residency Program in 2013.