According to many studies, mastering a sport takes thousands of hours of intense repetition and practice; for Omar Thompson, those hours are just coming a little bit later than most.

Thompson, a promising U.S.-born prospect at the Wigan Athletic Academy, waited until he was almost a teenager before he started playing soccer.

“I didn’t start playing football until I was 12 years old, and that was for a Sunday team called Wynthenshawe Town in England,” Thompson told TopDrawerSoccer.com in an email interview. 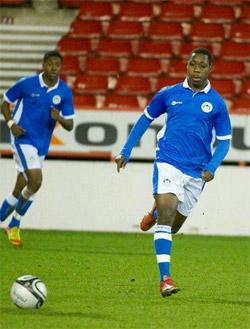 Sunday league is a humble beginning for a career that already includes a trial at Manchester City, three years at Manchester United Academy, and now a spot on Wigan’s U18 team.

The 17-year-old said he went on trial at Manchester City after his first season with Wynthenshawe Town. He was unsuccessful in that bid, but joined City’s rivals, United, after the next season and played with the Reds from U13 to U16.

The Miami-born attacker, who also has a UK and Jamaican passport, switched at the U18 level to Wigan.

“Its been great,” Thompson said about joining the Latics. “I adapted well in the environment. The coaches and players are great – everyone helped and welcomed me to the club.”

Earlier this month, Thompson scored twice in a 2-3 loss to Leeds for Wigan’s U18 squad. One goal was described as a 20-yard bullet that beat the keeper.

The Wigan prospect said he enjoys playing both midfield and forward.

“I am an attacking minded player and both positions allow me to attack,” he said. “I have good pace, strength and technical ability.”

His club thinks highly of those traits as Thompson spent a considerable amount of time last year, when he was 16 years old, training with the reserve team.

With the rapid rise at the club level, the attention from the U.S. Soccer Federation has been slow to catch up.

“There has been no contact yet,” Thompson replied. “But I would love to play for my country, it would be a fantastic experience.”

From college to the Philippines

In a little more than a year, Josh Boone has gone from college player to preparing to move overseas and play professionally in the Philippines.

The unusual tale began last fall, as Boone began his collegiate playing career at UNC Wilmington, making four appearances off the bench during his freshman year.

However, he began to look elsewhere after the season, as he didn’t think it was the right fit.

“When I got to UNCW, college soccer just really wasn’t what I expected it to be,” Boone told TopDrawerSoccer.com. “It turned out to be based on a lot more of the physical side rather than the technical side of the game. It was good, it just wasn’t for me.”

That led him on a whirlwind, worldwide tour that is set to land him a spot on Pasargad FC, a club in the United Football League First Division, where he’ll travel this week to continue his career.

After his college season, Boone left to try his luck in Europe, traveling and training with a variety of clubs in the third and fourth divisions of Holland. He also landed a trial with Eredivisie side Vitesse, although that didn’t end up panning out.

Prior to Boone’s trip, his agent, Sevy Sucurovic, had engineered a tryout with USL Pro side Dayton Dutch Lions. He attracted interest there, and it offered Boone a safety net if nothing panned out in Europe. When he came back to the States he played the USL season with the Lions.

It was while he was with the Lions that the Filipino connections began to emerge. Boone, who’s one quarter Filipino (his dad’s mother is from there originally), was called up into a Philippines national team camp that was to be held this summer in the States after his coaches emailed some of the team’s technical staff.

After a successful tryout – Boone is now a member of the national player pool – opportunities arose to play professionally in the country, eventually leading to him inking a deal with Pasargad.

Boone is scheduled to leave this week, and traveling and living abroad is nothing new to him, as he’s spent several months living in Holland previously.

“I’m looking forward to it,” Boone said. “Since a few years ago I started traveling around – lived in Holland for six months on my own, went to Ohio on my own, so I’m kind of used to being on my own with a team…I think it’s going to be awesome being on the other side of the world.”