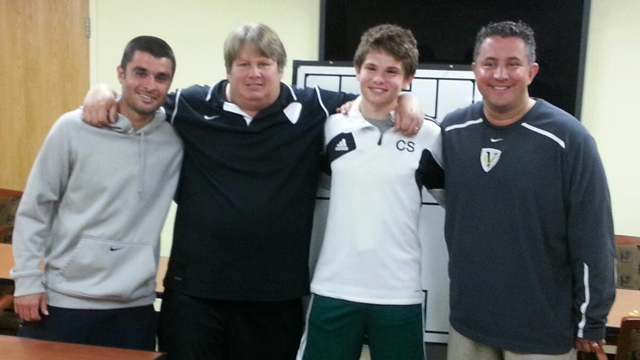 Cody Sweatte, a former member of McLean Youth Soccer of the Development Academy and Region I ODP, has joined SV Sandhausen’s U18 squad. SV Sandhausen is a 2. Bundesliga side that is enjoying its best spell recently with a 3. Liga championship in 2012.

Sweatte joined the club thanks to connections he made in the past.

“The opportunity at SV Sanhausen camp up through a friend I made on a previous trial I had which was set up by my former McLean USSDA coach Oliver Weiss,” Sweatte told TopDrawerSoccer.com.

The 17-year-old said that he does not have German citizenship but is attending school there.

“In Germany, you can stay in the youth program until U19, meaning I still have a year and a half of youth soccer left,” Sweatte said. “If I get offered a contract in that time, I will stay in Germany. If not, I will join VCU in 2015.”

Sweatte previously verbally committed to the Rams, which still remains his back-up plan if the opportunity in Germany does not work out.

Although the former Loudoun Valley High School standout is already in Germany, he can’t appear in any official competition yet.

“I will not be on the official roster, and not be allowed to start playing in games January [when he turns 18] as well,” Sweatte said. “In the meantime, I am training with them and playing in scrimmages.”

Sweatte also spoke about some of the differences he has noticed during his time in Germany.

“I would say the biggest difference playing here is the speed,” Sweatte said. “Everything is about how fast you can do it, whether its dribbling, crossing, passing, it’s all done at a million miles an hour. The thing they focus on the most though is the transition from defense to attack.”

Sweatte had a success youth career in Virginia with a spot on the Region I and Virginia ODP teams from 2008 to 2012. During that period, he also made a trip to Germany with the ODP team. The teenager also trained in Brazil with Brasilis Futebol Club.

Last season, he made 25 appearances for the McLean Youth Soccer U15/16 side in the Development Academy. He finished second on the team in scoring with three goals on the season.

ODFC News reported over the weekend that Real Salt Lake-Arizona winger Brooks Lennon is in talks to join Liverpool.

“I’ve been in contact with them the past several months,” Lennon told ODFC News. “We’ve been communicating a lot with Liverpool, trying to figure things out with the EU passport and a visa. Hopefully it all plays out.”

Lennon trained with Liverpool back in April where he impressed the Academy coaches in England while playing with the club’s U16 side.

The 16-year-old has one goal in three appearances with the RSL-AZ U18 side this season. He was also part of the U18 Men’s National Team camp in September.