When the interest is at its greatest and the pressure at its peak, Cowdrey’s game reaches new levels.

So when it came time for Cowdrey to choose a college program, naturally he looked for the highest mountain. He wanted a school that had history, championships and bright lights. 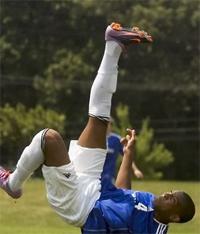 And so he found Indiana, where he’ll take his budding career beginning in 2013.

“Indiana is recognized as one of the country’s most successful programs and I wanted to be a part of that and experience it,” he explained.

What Cowdrey has already experienced is winning; and a lot of it. He helped lead his DeMatha Catholic High School in Maryland to a national title and is pushing to do the same for the Olney Rangers. The Rangers did capture their division in the Dallas Cup last month, thanks in part to Cowdrey’s heroics.

A strong target forward, Cowdrey put his striking ability on display with a hat-trick in his team’s opening group stage win over Dallas Texans Pre-Academy. Cowdrey would go on to register scores in the semifinal, and final triumphs.

By joining the Hoosiers, Cowdrey is following in the footsteps of another Maryland native who just so happens to also be his neighbor – New England Revolution defender Kevin Alston.

Alston enjoyed a stellar career at Indiana and it’s clearly had an impact on Cowdrey.

“Indiana doesn’t get a lot of kids from Maryland,” Cowdrey explained. “I was fortunate enough to have such a great recruiting process. Being recruited by some great programs throughout the country was unbelievable and I'm grateful for that.”

Ben Lark (Kentucky Rush) has signed to the University of the Cumberlands for the 2012 season. Lark is a physically gifted attacker who leads his squad in goals and assists. And by physically gifted, we mean 6-foot-4 and athletic.

Kellen Foster (CASL Chelsea) has verbally committed to UNC Wilmington for the 2013 season. Foster, a center midfielder, has been a part of some strong teams at CASL in region III play.

Cory Zimmerman (Sereno SC) has signed to Memphis for the 2012 season.

Oliver DeThier (Annandale Boys and Girls Club) has signed to Old Dominion for the 2012 season.