For colleges hoping to scout Luca Stauffer, you might be better off finding him on a Futsal court. 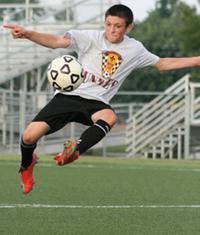 The skillful midfielder is the youngest player to ever make the U.S. National Futsal Team. He was recently selected to the 22-player roster for the CONCACAF Futsal Championships, which begin on July 2 in Guatemala City.

While Stauffer’s notoriety comes from his appearances with the national Futsal team, he is equally as adept on the grass too. He is a regular for the Shattuck-Saint Mary’s squad in the Development Academy making 18 appearances on the season while also attending various camps for Futsal.

His delicate first touch and deft skill with the ball has made him a coveted recruit among many of the top programs across the country.

“For me, the college process has been good overall,” Stauffer told TopDrawerSoccer.com in an email. “I am starting to narrow down my choices and hopefully decide, over the summer, on the best option based on academics and soccer.”

Stauffer cited the coaching staff as the top factor in his college search.

“The most important factor would have to be the coach,” he said. “When being recruited by a school, you need to be able to see if you ‘see’ yourself there. You need to see yourself being able to grow as a person and player. I believe the coach plays a critical role in that process.”

While Stauffer says that all eight schools listed above have something that makes him interested in attending there, three of them have already stood out in his mind.

“Right now, my top three would have to be New Mexico, Georgetown, and Creighton.”

Cody Witkowski finds himself in an interesting position. He has already graduated from high school, but yet to commit to any college.

As one of the younger individuals in his class, Witkowski has the option to play another year with the Chicago Fire in the Development Academy if he does not find the opportunity in the next few weeks for a potential program to join in 2012.

Late to the recruiting process, Witkowski has been in touch with a number of schools that are planning to take a look at his game during the Academy Playoffs in Frisco, Texas at the end of the month.

“I am looking for a top soccer program to make an immediate impact,” he told TopDrawerSoccer.com. “I am hoping for a Midwest school but open to any great options.”

Witkowski is a starting center back for the Chicago Fire U18, which is one of the top teams in the Development Academy in terms of points per game. The Fire defense has only let in 16 goals on the season, and Witkowski has been a major part of the uncompromising resistance to opposition attack.

The defender was also a standout for his high school, Batavia, as a starter all four years there.

If Witkowski is unable to catch the eyes of any college coaches at the DA Playoffs, he says he plans to train as much as possible at Toyota Park while playing with the Fire Academy for another season and possibly take a few classes at a local college keep up the routine of schoolwork before hopefully joining a program in 2013.