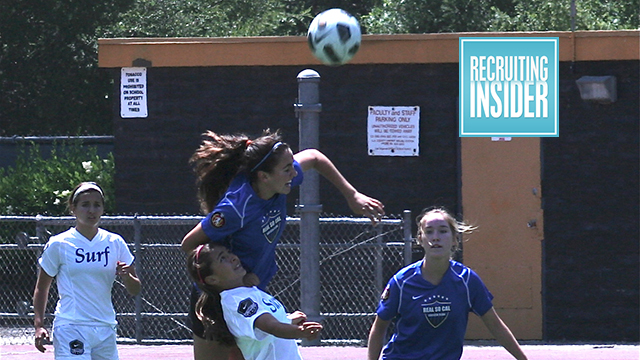 This week’s recruiting insider features both boys and girls in the search for finding the right college for their verbal commitments.

With his ridiculously high GPA (3.8) and well-known reputation as a leader on the field, Gilbert Simonetti is an ideal recruit for numerous schools.

And many schools have been in the ear of the high school junior already. Humbly Simonetti gives all the credit for the attention to his current club and former clubs.

“I was very fortunate to have had some really great coaching over the last several years, at both my former club and currently with the De Anza Force Academy,” Simonetti told TopDrawerSoccer.com. “I believe they have prepared me well for the challenges to come at the collegiate level.”

As for his search, he said that “living in several different places” while growing up makes location a non-factor for him.

“The atmosphere of the school is really important,” Simonetti said. “I need a place where I feel comfortable both on and off the field. The relationship with the coaches is important as well.”

The De Anza Force U16 Development Academy captain added that the recruiting process has been “interesting.”

“It has forced me to think carefully about the environment I would like to continue my soccer career and the type of academic environment that will allow me to continue to develop my interests.”

It’s still pretty early in the recruiting process for Palocko, a center back who started for her high school varsity squad as a freshman out in Ohio.

But she learned quickly that coaches are paying attention even during her first year of high school.

“When I started looking into the recruitment process last fall, it was so overwhelming to me with all the NCAA rules and everything, and I really didn't think college coaches would be interested in my age group,” she wrote TopDrawerSoccer.com in an email. “I was really surprised at how many coaches turned up at our U15 games at the National League events in Atlanta and Las Vegas, and the other showcases and MRL games that we attended this year.”

Although she understands that she still has time to make a decision and impress coaches, that didn’t stop Palocko from making a handful of visits in the spring, which also provided the opportunity to play against current college players.

“The colleges that I visited this past spring were such great experiences,” she said. “I was able to meet the current coaches and players, see their coaching styles, learn about college soccer life by talking to the current players, and tour the campuses. At one ID camp we scrimmaged against the current college team, giving me the opportunity to see if I can compete at a [Division] 1 level.”

It’s long been a goal of Palocko to end up playing soccer at the collegiate level. And she plans on taking the summer to continue her research and improving as a player, before ramping up her search process even more come her sophomore year.

“This fall I began taking a serious look at schools that have impressed me with their academics, as well as their soccer programs,” she said. “I have visited some of those schools, and have my favorites, but being only a freshman I don't want to rush into anything. I want to give myself as much time as possible to find the school that will be the best fit for me.”

Another freshman already under way in her recruiting search is Sofia Chambers, a standout midfielder on Real So Cal’s U15 ECNL side.

She quickly learned that the recruiting process begins as early as her freshman year, when she started receiving letters of interest from programs across the nation.

Fortunately, a member of her club’s coaching staff knows the process well, and is lending Chambers a helping hand.

“I consider myself lucky when it comes to the recruiting process for the simple reason we have a current DI women's college coach on staff at Real So Cal,” she wrote TopDrawerSoccer.com in an email. “Keith West (Head Coach CSUN) has been so cool in helping me decide what program would be the right fit for me as a player.”

A tough midfielder who enjoys playing as a holding or attacking midfielder, Chambers right now has aspirations to be an orthopedist, and the search for the right pre-med program to compliment a top-notch soccer program.

As far as location is concerned, Chambers also mentioned being interested in not straying too far from California, although in the end it’ll boil down to the soccer and education on offer.  But she’s not looking to rush anything, and is continuing to do her homework.

“I am patient and for the time being I am willing to see what else unfolds,” she said. “I am also proactive in the process, and I am in the middle of a fierce and ongoing letter-writing campaign.”

Along with everything else that she’s searching for, Chambers is extremely interested in playing for a title when she’s there.  “ I want to play for a school that is both academic and a contender for a National Championship,” she said. “This is very, very important. My absolute passion is soccer. I want more than anything to be a part of a team that scraps for each other, and that lives to play for each other, while on the road to a National Championship.”