Region I finals set in Pennsylvania Lancaster, Pennsylvania - The Region I Championships semifinals are over and 32 teams are still standing and will play their final games Tuesday at the Classics Soccer Park.

The winners from U14 and up will be eligible to play in the U.S. Youth Soccer National Championships July 26 through July 31 at the Reach 11 Sports Complex in Phoenix, Arizona.

Scroll to the bottom for scores courtesy of U.S. Youth Soccer. Below are match reports from two featured games:

On paper this game looked as though it might be good. HMMS Eagle qualified for the tournament by coming in second behind perennial regional finalist and State Cup winner Penn Fusion in U.S. Youth Soccer’s Premier League. While Penn Fusion’s defense allowed fewer goals in group play, both teams won their groups solidly with three straight wins.

Penn Fusion came into the semi-final game after defeating the Eastern New York Black Watch Midlothians 3 to 1, the West Virginia Elite Titans 1 to 0 and Connecticut Beachside 3 to 1. HMMS Eagle, meanwhile, defeated Western Pennsylvania’s Beadling 2 to 1, Masssachusetts’ Blazers 4 to 3 and Delaware’s Kirkwood Ajax 2 to 0. 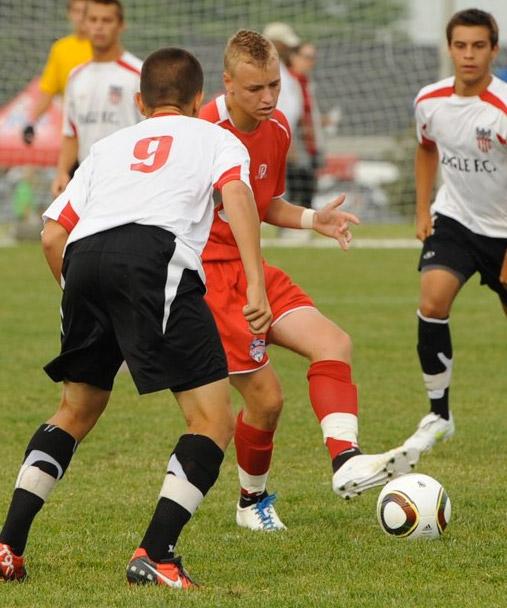 Chad Craig (red). Photo courtesy of Candace Rosenberry.
And while both teams have plenty of stars on their roster, only HMMS’s Colton Storm was selected to spend last year in residency in Bradenton, Fla, with the U.S. National Under-17 Men’s program.

So what actually happened in the game was a little surprising.

With both team’s future on the line, the game started out at a furious pace, with Penn Fusion perhaps getting a little bit more possession but neither team getting the time or space to really put an attack together. Then suddenly Penn Fusion’s Alex Murphy launched a ball toward the box from a good 40 yards out and teammate Joe Raymond ran to it and jumped to gently redirect the ball with his head over the goalkeeper’s hands and into the back of the net.

HMMS Eagle got the ball to Temple verbal commit Jared Martinelli who raced at Penn Fusion’s goal with the extraordinary speed that made him interesting to college scouts. But when he fired, the ball not only cleared the goal, but it also went over the netting behind the goal.

Penn Fusion also wasted a chance when Raymond, a Fusion outside back who does a great job pushing up and getting involved in the attack, passed the ball to a sprinting Evan Moats, who got free for a shot that also sailed off, eventually landing on a car in the nearby parking lot.

A few minutes later, Penn Fusion was awarded a free kick from about 35 yards away from HMMS’s goal. It was a good angle, being fairly straight on the goal, but the distance did not seem to make it a good chance for a shot.

Then Chad Craig dribbled into the Eagle box and scored goal number 3.  Shortly after that Keagan Rosenberry took a corner that Benjamin Kennel shot on the Eagle goal. The ball flew back out of the goal on what appeared to be a successful Eagle clear, but the referee whistled it Penn Fusion goal number 4. At the Region I Semi-finals. In the 34th minute.

The Eagle team was down but not out. Martinelli beat the Penn Fusion defense and fired a hard low shot. Penn Fusion keeper Kyle Morton, who vocally helped to organize the team’s defense throughout the first half, made a diving save to his left, and ball rolled slowly away for a moment. No Eagle player was close enough to take advantage of the chance.

The second half began with the Eagle team playing for their honor and pushing to at least not go home being shut out. As Penn Fusion relaxed just a tad, the Eagle players were able to connect a few more passes but their moments of possession were usually short lived.

Although Storm did seem to have a nice touch on the ball and decent speed, the Penn Fusion players were able to break up any organized attack that Storm, Martinelli and their teammates could get going.

Then 20 minutes into the second half, perhaps out of frustration, the Eagle goalkeeper grabbed the feet of an attacking Penn Fusion forward, pulling him down in the box and prompting the referee to award a penalty kick, which Craig converted for goal number 6.

The sixth goal pretty much turned the rest of the contest into a non-game, as both teams fairly intelligently slowed things down a little and passed the ball around the field.

Penn Fusion coach Lee Martin said he expected the Eagle team to give his team more of a challenge, but that his team had been preparing all week to be strong at the end of the tournament.  The team has stayed together in the hotel at the Classics Park, and taken daily ice baths after the games, Martin said.

“It’s all in the preparation,” Martin continued. “We had an extremely good warm-up and as soon as the whistle blew I knew the result would be good.”

The clash between two programs that are riddled with Division 1 recruits was perhaps more exciting than the score line indicates. Both teams started off the game playing with urgency and speed.

PDA got to the semi-finals after trouncing Maine’s Seacoast United 8 to 0, defeating New Hampshire’s Seacoast Premier 1 to 0 and tying Western New York’s Buffalo Soccer Academy 1 to 1. The Stars of Massachusetts, meanwhile, downed Connecticut’s CFC United 4 to 1, beat Virginia’s Burn 3 to 1 and fell to West Virginia’s Lady Stingers 0 to 1.

Although the speed of play was preventing either team from getting a stretch of possession, PDA put together a few passes in Massachusetts final third, and the little sequence culminated with Catherine Zimmerman, who has committed to Providence, feeding a nice ball to Emily Damstrom. Damstrom, who is listed as a Villanova verbal commitment, dribbled dangerously into the box, where a Massachusetts player caught up to her and enough contact ensued to prompt the referee to award PDA a penalty kick in about the 11th minute.

Just five minutes later Cara Poole, who plans on going to Monmouth, won the ball near the right touch line and launched it into the air toward the Massachusetts box, where Rachel Cole (verbally committed to Rutgers) leaped into the air to head it in the upper right corner.

The two-goal deficit did not take the wind out of Massachusetts’ sails. They continued to play at a furious pace, with Massachusetts’ Taylor Levy, a Monmouth commitment, especially running all over the field to run down loose balls. Corey Persson, who has committed to Penn State, courageously stuffed a PDA defender’s clear but could not score on the opportunity she created.

PDA also continued to attack relentlessly. PDA’s Kristen McNabb (a Virginia commitment) went on a dribbling run that passed three Massachusetts players before she was finally dispossessed near the Massachusetts 18-yard box. During one attacking flurry, Massachusetts goalkeeper Bailey Bruckmann, who is committed to Northeastern, made a fantastic save. But just second later, as Bruckmann shouted “no service!” a ball came flying into the box, launched from way outside the 18-yard box by PDA player Nicole Driesse. It looked as though it was going out over the upper left corner, but it unexpectedly clanked against the corner and went in.

Although Massachusetts now faced a huge deficit in soccer terms, they fought on. Persson brilliantly stole the ball from a PDA defender between the left flag and the PDA box, and sent a beautiful chip into the box, but the PDA defense handled the ball without a problem.

There was really never any let up from either team, especially with the PDA coach Mike O’Neill’s telling his player that the game was 0 to 0.

Afterward, O’Neill said the Stars of Massachusetts are and the PDA are similar programs because they are both among the top girls clubs in the country.

“There is a very good rivalry but a friendly one,” O’Neill said. “We have a lot of respect for them.”

PDA now plays the Pennsylvania Strikers, who defeated Eastern New York’s Albertson Fury 4 to 1 in the other semi-final, in the finals on Tuesday at Classics Soccer Park.