Watching the U.S. U17 Women’s National Team find mixed results in a pair of scrimmages with Japan, it was clear that coach Albertin Montoya has yet to find his team.

He said us much after it was all over:

“We are still identifying players and we have about seven months until (2012 FIFA U17 Women’s World Cup) qualifying. This camp served its purpose. Japan has its qualifying for the World Cup in a month and a half so they are at a different stage than us.”

Japan drove that point home with a 2-1 victory over the U.S. on Sunday after they had largely outplayed the Americans during a 2-2 tie a few days earlier. 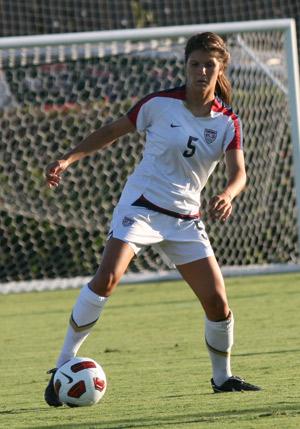 Madeline Bauer
The two matches featured a lot of personnel changes as some of the staples of previous U.S. squads – like Madeline Bauer, Joanna Boyles and Amber Munerlyn - didn’t play in the second match as the coach was getting a look at different combinations.

So who did stand out during the two-match friendly? Let’s take a stab.

Toni Payne: She was the most dynamic player in camp. Montoya talked a lot about wanting to see his team play aggressively and she certainly got the memo. When she gets the ball, she attacks and has all the tools to create. No player is flawless, and there were times when she held the ball a little too long, but we liked her offensive intent.

Morgan Andrews: Andrews has been a star for what feels like years and she’s a complete and steady product on the field. With great size, technical ability and decision-making, Andrews was a leader at center back. She was also the team captain and seemed to have the pulse of her teammates.

Summer Green: Green can really score and is always a threat on the field. She plays with strength and (here’s that key word again) aggression. Green scored the lone goal in the second match and created one in the opening game against Japan.

Lauren Kaskie: This left-footed midfielder was a spark for the team. She works hard, makes good runs and is accurate with passes. Kaskie played some quality services in match No. 2 and showed enough on both days to prove she was a positive factor.

Emily Bruder: One of the stars of the opening match, Bruder created havoc at striker. She was hard-working and opportunistic and embodied a lot of the qualities Montoya was looking for.

Arielle Ship: Ship is a player who knows how to use her athleticism. She was hard not to notice when coming into the game, pressuring Japan in the midfield and making quality runs along the way.

Gabbi Miranda: Miranda had some good moments defensively, as she worked hard for position and stole a couple possessions from the Japanese.

Danica Evans: She was a bundle of activity up front, pushing forward for scoring opportunities and pressuring hard. She missed a chance or two – all strikers do – but overall she played with ambition.
The USA will come together next for a training camp in December at the Olympic Training Center in Chula Vista, Calif.