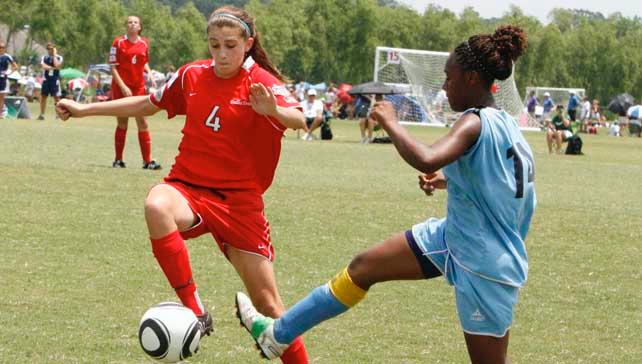 BATON ROUGE, LOUISIANA – Matches were moved up to early morning start times in order to beat the heat here Monday, but the high temperatures were maintained on the playing field as teams at the U.S. Youth Soccer Region III Championships played for their national championship survival.

U15 Girls: Hurricane FC (OK) 2, Dallas Texans 1
Early on, the Oklahoma side were imposing their will on the game, making it very difficult for Dallas to get out of its own end. Still, Hurricane weren’t able to create any real quality chances on goal as the Texans’ back line, anchored by excellent center back Taylor Jackson, held firm.

Hurricane coach John Rhein implored his team to be patient and look for opportunities to combine passes. Midfielders Krissi Killion and Katie Sprouse seemed eager to do just this and it was Killion who ultimately took matters into her own hands, lashing home a strike from 30 yards to give her team a 1-0 lead.

As is often the case the opening goal relaxed the match and made it more enjoyable to watch. Texans started getting forward more, but it was a giveaway in front of the Hurricane goal that gifted Amanda Stickney a scoring opportunity and the Texans’ midfielder put the chance away to make it 1-1. 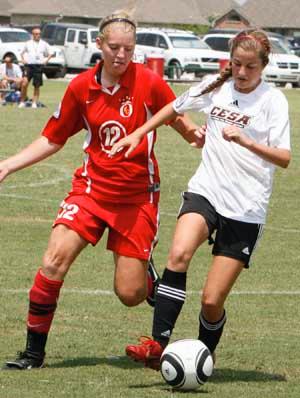 Region III players compete.
Hurricane substitute Jessica Washington came on and put in some good work as a fast and resourceful attacking player. She later contributed to the team’s defensive effort. Texans’ center back Jackson was strong in the air and in stepping to the ball. Dallas created some late chances in the 1st half, first when Jasmine Hart found Julia Dyche with a cross, but the volley went just wide. Kelsey Gorney also followed with a good move on the right, but her shot also missed the target.

After halftime, Hurricane came out strong and Claire Kelley scored with a rocket launch that went just under the crossbar to put the Oklahomans up 2-1. The action began to flow back and forth now with a spirit befitting a knockout round matchup.

Texans’ Anase Asom made a good run and shot that produced a top-level save from Hurricane goalkeeper Kaela Little. Hart then fought off a challenge to get a shot on target, but Little again made the save. On the other end, Hurricane’s Shiloh Price fed Kelley with a good pass, but the shot was well-saved by Texans’ keeper Ashton Hierholzer.

Hurricane’s Krissi Killion, a standout in midfielder/forward with her work rate, vision and skill, made a surging run followed by a shot that went just over. Texan’s Julia Dyche was trying to play some dangerous balls in but Hurricane was able to deal with the threats and kill of the lock, winning the match 2-1.

Rhein, who is about to relinquish oversight of the team to another coach at the club after three years, said, “It was a contrast in style. They are a little more direct than we are. We played them in the National League in December and they beat us 1-0, but we felt possession-wise we were able to do something, Rhein said. “So we tried to make sure that we stuck to that game plan and let the goals come to us. (Scoring that first goal) really relaxed us.”

Hurricane goalkeeper Kaela Little, despite protestations that she “didn’t know what to say” gave eloquent credit to her squad’s defensive organization.

“Our defense knew their dangerous players from playing them before multiple times, and we just stuck with them and worked our hardest,” she said. “Our sweeper (Darienne Chapman, center back) organized it very well and was our leader back there.”

Killion said the team was able to execute and stick to a strategy that proved effective on the day.

“We know exactly how they play and came out with a little bit of a game plan. We were going to spread the field a lot, which we did, and we were just able to control it back there. I don’t think they were ready for what we came out with,” Killion said. “We got 3rd in national league so we’re not automatically going to nationals, so we know we have to really work for it. We’ve trained hard for this.”

U17 Boys: GSA Phoenix 3, Norman Celtic (OK) 1
Things looked good early for the Oklahoma side, with Shawn McLaws scoring a nice goal and the team generally outplaying their rivals from Georgia.

This changed late in the 1st half when a Celtic player was dismissed for a studs-up tackle at midfield, reducing his side to 10 men for the duration of the match. While the score was still 1-0 at halftime, GSA began to press forward more as the 2nd half began, forcing Celtic goalkeeper Bradley Bradford into some good work between the sticks.

GSA’s Chase Park was brought down in the area for a penalty kick, which Iain Smith calmly converted to tie the game at 1-1. Bradford made a great save on a drive by Josimar Olmos, but Matt Shreiner was on hand to knock home the rebound and GSA led 2-1.  Celtic tried to counter with some long balls, but defensive midfielder Connor Yeaney was very composed in the back dealing with the threats and winning some key headers. McLaws turned in a strong individual effort that nearly brought an equalizer but the shot was just off target.

The final scoreline came as a late longball from GSA prompted some miscommunication in the back for Celtic an own goal, making it 3-1 and putting the Georgians into the semifinal.

U18 Girls: Challenge SC (STX) 3, Triangle FC (NC) 0
Challenge has won the South Texas State Cup and the Region III Premier League West, and has yet to give up a goal in four matches at this event. Central midfielder Kylie Cook, who was a juggernaut in winning headers and stifling the opposition attack through the center, said the team’s communication and organization is a key to its success.

“We try to keep it organized among the center mids, like Tricia (Mallory) and Kelsi Brown, our defenders tell us where to go so we can block off passes. It’s really a team effort, because if you’re not organized in soccer there’s no way you can win, because balls get slipped in behind all the time,” Cook said. “The faster we played and the more organized we were, we had more opportunities to score. It’s important to stay organized so we can attack with our wide players.”

Cook, who will be playing her college soccer this fall at Houston, added that losses in two previous regional finals have the team hungrier to go out with a chance to win a national title.

The team looked the part again Monday, defending well and attacking with efficiency. Annalisa Hall scored a 1st half rebound goal after Kelsi Brown’s piledriver was denied by a diving save from Triangle goalkeeper Kori Briscoe.

The North Carolina team was missing some starters due to injury and also left-footed standout Mollie Pathman, who is preparing for the World Cup next month with the U.S. U20 Women’s National Team. They got a very good match from Madyson Marshburn, showing good crosses and a solid work rate. One such cross set up fellow forward Gloria Douglas who ran into the area with the ball but fired over the target. Emily Burchette was solid in defense for Triangle, putting in some good tackles and scrambling the ball away from the 6-yard box more than once.

Challenge went back on the attack early in the 2nd half and a shot from Cook forced Briscoe into another good save. A well-executed counter attack saw Shannon Mclain win the ball and run through the middle before feeding LSU-bound Addie Eggleston on the right. Eggleston delivered a fantastic cross-field pass for Hall, whose shot went just over.

In the back line for Challenge Danielle Munoz was putting in some crunching tackles and also distributing well. Pat O’Toole’s Challenge side is very deep with seemingly every player on the roster capable of coming in and making a solid contribution. Brenda Saucedo played a good pass from Meghan Gibbons, who fought off a challenge to get a shot off, but Briscoe made another good save.

Triangle then had a great chance to tie the game when Margaret Kiser’s cross was handled in the area leading to a penalty. Douglas took the spot kick but it was saved by Challenge’s excellent backstop, Megan Kinneman who is also going to LSU, and the match remained 1-0.

But not for long, as Challenge’s Kelsey Missimer sent in a ball that deflected off a Triangle player and fell kindly for Addie Eggleston, who controlled the ball well and then finished perfectly to make it 2-0. A few minutes later the Georgia-bound Gibbons ran onto another long ball, pushed it past a defender and provide a cool finish for a 3-0 final score and a semifinal berth for the Houston-area side.