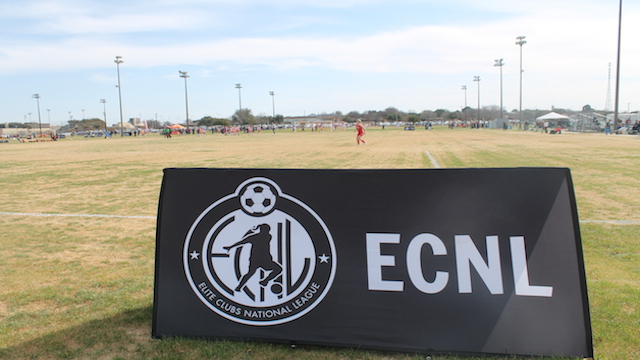 FORT WORTH, Texas — Home field advantage? This one went quite a bit beyond that.

The Dallas Sting U17s rocked back the prestigious Michigan Hawks 5-0 on Friday in one of the first games of the ECNL’s showcase event here at Rolling Hills Park. Mimi Asom bagged a hat trick, and the de facto hosts looked in complete control for much of the match.

The ENCL’s Texas showcase event, which runs through Sunday, opened to clear, high skies and a brisk wind on Friday. And in case visiting teams had forgotten, the roster of attending programs was a sober reminder that the Metroplex is well represented for this weekend’s action-packed slate of games. With travel mileage in the double digits for most of those teams, that would seem to give them a slight edge on competition who’d traveled far and wide.

Still, the Sting hardly seemed to need their larger-than-usual cheering section. The teams sparred without release for most of the first half until Asom swept up a loose ball after a collision between the Hawks’ keeper and one of her defenders. Asom pushed home the goal for a 1-0 edge at the half, and that set the Sting up for a massive second half in which they bagged four more. The other two tallies came from Julie James and Blair Thorpe.

“We’re in the middle of high school season,” Sting U17 coach Antonio Pecorari said. “We had a couple of players who decided to play high school this week and let the other part of their family down, so we came in and adjusted some players in some other positions and I thought we performed great.”

The win, guided in large part by Asom’s guile, kept the Sting’s unbeaten record alive at 10-0-2, while the loss, just the second of the Hawks’ season, dropped them to 10-2-2.

Given GSA’s perfect 14-0-0 record entering this weekend’s showcase, it can hardly be considered a total surprise that they walked out of their opener with a win. But it is a little surprising that it came with such relative ease over a program as similarly dominant and equally as perfect as D.C.-area side McLean.

The billing here was easy to parse, but the game hardly turned out as imagined. GSA fronted ballyhooed striker Jennifer Westendorf, the 2016 Notre Dame commit with poaching ability for days. Her counterpart Mia Hoen-Beck, a prized 2015 committed to Stanford, is one of the best strikers in her class and will be one of the jewels of a 2015 class TopDrawerSoccer.com recently rated as the best in the nation so far.

And yet neither had a massive role to play in this one. Westendorf, who sat for half of the second stanza, probably had the better day, since a long-range blast of hers was cleaned up on a rebound by Amanda Vocelka just before the half for a 1-0 lead. But neither scored, and Hoen-Beck was largely neutralized by an effective GSA back line that forced everything out to the flanks.

GSA nipped a second about 15 minutes into the second half when Vocelka again popped up in the box and ripped home a point-blank roofer after McLean failed to clear out a mad scramble inside the six. McLean had a few decent cracks at goal in the second half, but Hannah Goudy was on point and saved two toughies in particular to preserve the impressive opening win in Texas.

Mallory Pugh is away on national team duty, which left arguably the best U16 side in the entire ECNL without its rock and best player. At least early on, that seemed to have Real Colorado off balance against upstart Carmel United.

Real Colorado bagged the first off a Meali Enos seeing-eye free kick from about 20 yards out. It wound its way through traffic and snuck through, and Real Colorado seemed to everyone to be off to the races. Its deadly quick front line of Alexa Groesser, Cydney Billups and especially Julie Mackin, who came out with a hat trick, pressed hard from the start, but they had to weather a brief storm first.

Carmel shocked Real Colorado by nipping a goal well against the run of play via Shaili Kumar, and they managed to take that draw into the halftime break.

But the idyll didn’t last. In the span of 10 minutes in the second half, Mackin blitzed Carmel’s left flank and scored three goals primarily through her prodigious speed and simple finishing. That cracked the game wide open and allowed Real Colorado to coast home with the win. With or without Pugh.

After being stunned by a goal just two minutes in, Crossfire Premier fought back to take the lead on a 35-yard laser free-kick by Brooke Pingrey.

“Taking free kicks is something I really like to do,’’ Pingrey said. “Because I’m only 5-3 and being left-footed, I think I take some people by surprise.’’

D’Feeters broke in front of a 12-yard curling shot by Brooke Ramsey after Crossfire had difficulty with clearance from its box.  Crossfire equalized when Beth Stella intercepted a misguided goal kick and struck a low bullet from 15 yards that went through the arms of the keeper and dribbled into the net. Crossfire’s Madekyn Seckman made what turned out to be a stop of a shot could have increased the deficit to 2-0.

FC Dallas struck for both goals in the first 20 minutes and made them stand up for the victory. Solid FC Dallas play in midfield limited comeback hopes for Vardar.

The first goal came on a free kick by Addison McCain from just outside the penalty area in front of the goal. Natalee Heiser drew the penalty with a slicing run through the Vadar defense. Kiley Martens increased the lead a couple of minutes later when the ball came loose at her feet just 10 yards from goal. She made no mistake, burying the ball in the right corner. Vadar’s best threat came just before halftime. A half-volley by Shannon Casey soared over the crossbar. McCain kept FC Dallas on the attack. She was responsible for 49 of the team’s 128 successful passes.

Precise passing, a Colorado Rush trademark, produced the only goal of the match. The attack began near the center line when Jordan DiBiasi took a pass from Madeline Flom and cut to the touchline.

When Texans’ defenders closed in, she cut to her right and worked a give-and-go. When the return pass arrived, DiBiasi found herself one-on-one with keeper Leah Cochran. DiBiasi’s shot near the right post was blocked by Cochran, but Rush midfielder Jaime Brunworth was there to punch in the rebound. The Texans dominated in possession time in the first half and had plenty of chances to equalize with the wind at their backs in the second half. The best chance came when Emily Bates hit the post from close range and Madison Haley blasted the rebound over the bar.

Elizabeth Stahlman’s header over the outstretched hand of the keeper provided the only goal Carolina Elite needed. The shot from the six-yard box was the culmination of an impressive buildup. Defender Reece Diaz-Verry started the play with crisp pass to Arianna Milicia, who in turn dribbled down the touchline. Milicia sent a pass into the box and Stahlman was filling the area.

“It was a perfect ball,’’ said Stahlman. “I scored before, but it is nice to win the game on one.’’ The match was scoreless at halftime and Rage threatened to equalize in the latter minutes, thanks to a solid effort from Jessica Ko.