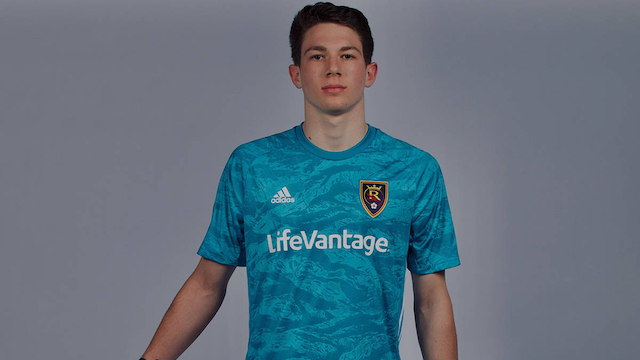 Real Salt Lake added two more Homegrown players to the first team roster on Thursday with the introduction of Gavin Beavers (goalkeeper) and Jaziel Orozco (defender). Beavers, from Henderson, Nevada, is one of three Homegrown goalkeepers on the Real Salt Lake roster (David Ochoa and Jeff Dewsnup). Orozco, from El Paso, Texas, had a standout campaign with the Real Monarchs. He earned the attention of the Mexico national teams and trained with the Mexico Men’s Senior National Team last year.

Full details on the signings are below.

“In Gavin’s brief time at our club, he has established himself as an elite goalkeeping prospect. His shot-stopping ability and top-end athleticism are off-the-charts for a player at his age. In adding Gavin to our roster of young goalkeepers, we are very well-positioned at the position for years to come,” Real Salt Lake General Manager Elliot Fall said.

“I’m very grateful and appreciative for this opportunity with RSL,” Beavers said. “Excited to get into preseason, to work hard, continue to learn and improve my game everyday, just do everything I can to help my team and teammates be successful.”

Beavers is the third Homegrown player announced by the Club this week to reach the pinnacle of the Club’s development pipeline, moving from RSL Academy to Real Monarchs and eventually Real Salt Lake, joining

As of January 12, Real Salt Lake’s current roster headed into 2022 listed alphabetically by position is as follows:

Real Salt Lake have signed defender Jaziel Orozco from Real Monarchs and the RSL Academy, the Club announced today. Orozco’s signing continues the Club’s long an impressive history of producing talent from within courtesy of its academy. Orozco joins RSL on a two-year contract.

“To find a center back with quality on the ball and who reads the game as well as Jaziel, is rare - to find it in a player his age is exceptional,” RSL General Manager Elliot Fall said. “Jaziel provides an ideal partner to our other young center backs and we’re excited to watch them develop over the next several years.”

After making his professional debut in the USL Championship on May 14, 2021 against LA Galaxy II, Orozco signed his first professional contract with Real Monarchs. Orozco immediately became a staple in the Monarchs backline, appearing in 24 matches, only missing time due to international duty. Orozco, 17, recorded 80 clearances, 26 interceptions and 14 blocks, second in every category for Real Monarchs last season, only behind veteran center back Kyle Adams.

As a result of his success with the Monarchs Orozco gained the attention of the Mexico National Team, earning several call ups to the U17 and U20 camps. In the lead up to CONCACAF Gold Cup he was invited to spend a month training with the senior team to help them prepare for its upcoming matches.

Prior to joining the RSL Academy Orozco had training stints with Liga MX clubs Tigres UANL and Santos Laguna before ultimately electing to sign with Real Salt Lake’s residency program in Herriman, Utah. In his one year with the Academy the El Paso, Texas native appeared in 14 matches at the U16 and U17 levels.

Orozco is the latest in a long line of defenders to graduate from the RSL Academy. Earlier this year fellow center back Zack Farnsworth signed his first professional contract. The two join a quartet of Homegrown Players that played pivotal roles during RSL’s historic run to the 2021 Western Conference Final, including Andrew Brody, Justen Glad, Aaron Herrera and Erik Holt.