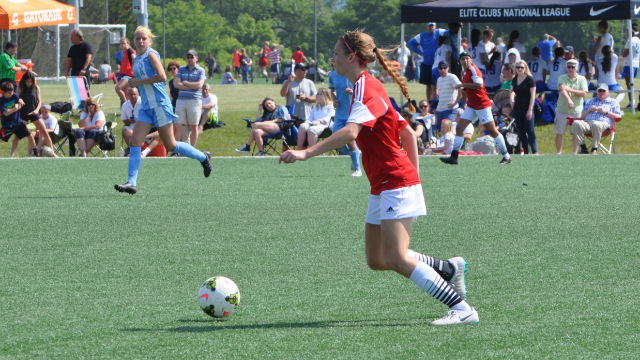 Emmanuel Sabbi, a forward for the Chicago Magic U18 Development Academy team, and Samantha Kleedtke, a defender for the Michigan Hawks U15 ECNL team, are the TopDrawerSoccer.com Academy Players of the Week.

Sabbi managed to put in four of his team’s five goals in a vital pace-keeping 5-3 win over FC Wisconsin Nationals, while Kleedtke scored a goal and anchored a defense that helped the Hawks to a 3-0 showing at the ECNL National Event in New Jersey.

With the season winding to a close, the Chicago Magic U18 team is hot on Shattuck-St. Mary’s heels for first place in the Development Academy’s hotly contested Mid-America Division. The Magic have a game in hand on SSM and sit just four points off the pace with three matches left. That’s thanks to a wide open 5-3 win over the Nationals over the weekend that served as a glorified showcase for Sabbi’s ability to get goals. The talented No. 9 scored Chicago Magic’s first three goals, including tallies spaced just five minutes apart for a 2-1 lead inside the opening 20 minutes. He tacked on the ultimate capper in the 69th. Sabbi was recently called into a U.S. U18 MNT camp in Bosnia, and his eye-catching performances in the DA might win him a few more.

For the next three seasons, all eyes will be trained on this particular ECNL U15 group as it matriculates up the club ladder. Last season, it won the U14 national championship with a convincing display, and there are rumblings that it could be the first group to win national titles at all five age groups from U14-U18. At least at the back, the heart of that run will be Kleedtke, a ball-playing center back with a keen eye on set pieces. Hawks went 3-0 in New Jersey, and Kleedtke’s organizational capacity and impeccable timing helped them get there. In the team’s second match, she hit a free kick that ultimately helped Hawks brush past World Class FC 2-1, and it was impossible to miss her impact at the back. Can Hawks use the big weekend to kick on for a second title?