When it comes to developing players for both the collegiate and professional level, FC Dallas Academy is certainly doing its part – and then some.

The results have been impressive in the past five years, both on and off the field. Six players signed to the first team, a couple dozen players called into various youth national teams, four straight Finals Week appearances (including last week's dominant performance), alumni playing at top universities across the country, and the highest rating in the country (four stars) from U.S. Soccer’s Technical Staff. 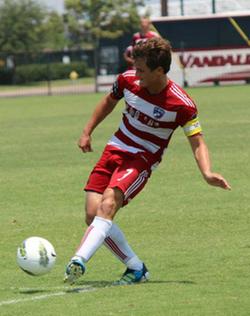 Vice President of FC Dallas Youth and U18 head coach Chris Hayden attributes the base of the success to player identification.

“Well I think the first thing you can do is select the right players,” he told TopDrawerSoccer.com. “We certainly have a type of player we like to attract, and I feel like we’ve done a pretty good job selecting kids with the right physical, technical qualities, but also the right demeanor, personality.”

But once selecting players for each respective team, it goes far beyond that – and that’s what FC Dallas has done so well. The Academy-age kids train five days a week, holding sessions in the morning before shipping off to local schools in Frisco.

The man responsible for laying the groundwork of the Academy’s success, Oscar Pareja, is no longer with the organization, as he left this past winter to take the head coach job with the Colorado Rapids.

Hayden and John Ellinger, the Executive Director of FC Dallas Youth Programs, who served as the U.S. U17 MNT coach in 1999, now run the program. It’s clear that the influence of Pareja still lives on, as evidenced by the playing style that has been unchanged since the beginning – another key to success.

“Our teams have maintained a certain style over four years that I feel like has been very consistent regardless of which players have been a part of it,” Hayden said. “We do absolutely strive to work every day to continue to strengthen our style, so that our kids know who we are and what we are.”

By sticking with the same style, it allows for players to seamlessly switch between age groups, providing the challenges needed to further development at different skill levels. For example, U17 international and FCD midfielder Kellyn Acosta has spent time playing for the U16 and U18 teams this past academy season, easily transitioning between the teams, while Jonathan Top does the same between the first team and the U18s.

“When we take one player out of the lineup and put another in for instance, many times that kid fits right in and it’s very easy for him to adapt and to perform at a high level, even with the group he’s not normally playing with,” Hayden said. “We can take a 16 and plug him into the 18s and he wouldn’t miss a beat.”

Part of the program’s success can also be attributed to the soccer hotbed that is Texas, as it currently supports nine Development Academy programs, four of which are in the Dallas-Fort Worth area.

However, few programs can provide the same sort of training environment that FC Dallas can, again a tribute to both the program and the support of the Hunt family ownership group.

Having players in training so often gives the coaching staff more access to players, and if done in the right fashion, allows players to develop and cultivate the right habits on the field.

“It helps us from a training habit standpoint because we see them more frequently, we can pay attention to smaller details,” Hayden said of the training schedule. “We have a strength and conditioning program place now, a partnership with a local athletic center in Frisco that we work with… We are also able to address a lot of the things that we wouldn’t be able to three nights a week.”

Nowhere is the evidence paying off than at the youth national team level. FC Dallas has had players called up in the latest camps with the U15 (Coy Craft, Martin Salas), U17 (Aaron Meyer, Jordan Cano) U18 (Acosta) and U20 (Daniel Garcia, Jonathan Top) Men’s National Teams.

Other alumni are currently playing or set to join top college programs like Maryland, New Mexico and North Carolina, while Top, Richard Sanchez, Moises Hernandez, Ruben Luna, Bryan Leyva and Victor Ulloa all signed directly with the first team from the Academy over the last two years.

And the club’s commitment to development is set to expand further this fall, as Hayden said the training programs are set to add players from the U13-U15 age groups. That means more than 100 players will train five days a week before school.

“That was really our goal several years ago when we started talking to the district to see if we could find an Academy partner that would allow us to address the kids’ soccer needs, and not also sacrifice their academic standing, the ability to graduate on time so they are viable college players,” Hayden said.

Top, who has since debuted for the first team, thinks this next step is going to be huge.

“Whenever you train, for me, as a forward or in any position, you train so much that things become instincts, like second nature to you,” he said. “As a forward, maybe flicking the ball on or as a defender knowing where to be.

“Things like that come naturally from training so much, repetition, doing it every single day, so it becomes so much easier. You’re definitely going to see the speed of play increase as you train more and more. I think that it’s going to help a lot that teams and players are training now five days a week.”

One accolade that has eluded FC Dallas Academy has been a national title, an issue that they’ll try and rectify at the U18 level starting on July 16 in Houston.

Regardless of achieving that or not, it’s full speed ahead for player development in the heart of Texas.