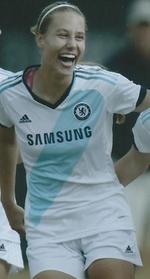 The Arizona native was excited about the decision, to say the least.A defender who is dangerous on set pieces and calm on the ball, Kellie Peay will get the chance to further her playing career at one of the most prominent soccer schools in California.

“I decided to commit to Santa Clara University because of their all-around amazing school and soccer program,” she told TopDrawerSoccer.com. “Not only will I be able to play the sport I love with other incredible players but I get the opportunity to surround myself with great people at a beautiful school. I’ve always told myself I’d love to go to school in California if I had the chance and now I am more than happy to say that I get to.”

Along with a strong soccer program, Peay knows that heading to Santa Clara will help her to fulfill her potential as a player. She also thinks that the transition to the program won’t be too big of a deal, something else that drew her.

“The school itself really drew me in because the environment is a lot like where I’m at now,” she said. “Although SCU is much bigger and is obviously nothing like high school, I felt very comfortable there and that I could accustom myself very easily.”

Chemistry is a huge part of the success of a soccer team, and strong evidence of that can help a college program lure recruits. The player-coach dynamic at Purdue helped the Boilermakers lure California’s Nicole Robertson.

“I observed a great interaction between Coach [Robert] Klatte and the soccer team,” she told TopDrawerSoccer.com. ‘The players had nothing but good things to say about Coach Klatte and the high level of training they receive from all the soccer staff.  I was impressed with the training program and facilities. I feel I can achieve my fullest potential at Purdue.”

Roberton, who committed to the program in early December, also liked what the school had to offer its student-athletes.

“The Brees Student Athlete Academic Center really stood out for me,” she said. “Purdue's priority on academics and providing help to the athletes is very important to me. I want to receive the best education possible and I believe I can with such a great support system they have established at Purdue.”

The combination of staying in her home state and getting the chance to play at a strong Division II program was enough to sway Savannah Boarman.

“I love the mountains and everything about Colorado. I don't feel I do as well in the heat and so it just made sense to stay here,” she told TopDrawerSoccer.com. “Fort Lewis has done well in women's soccer and plays in one of the toughest conferences in the nation. Coach Damian [Clarke] is very personable and cares about each player individually. The team seems to really have fun and I wanted an environment that was competitive but balanced.”

Staying close to home will give Boarman the chance for her family to see her play, and the Fort Lewis campus was something that drew her to the school.

“There is wildlife everywhere and it overlooks the town and reminds me of what Colorado ‘home’ is all about,” she said.

Midfielder Brooke Evans, from La Roca Premier (Utah), committed to Northern Arizona for the class of 2014.

Defender Alexandra Day, from Seacoast United (New Hampshire), committed to American for the class of 2013.

Goalkeeper Elise Nord, from FC Portland, changed her committed to San Diego State for the class of 2013.

Forward Rebecca Copeland, from Huntsville FC (Alabama), committed to Georgia State for the class of 2014.

Goalkeeper Ella Dederick, from Real So Cal, committed to Washington State for the class of 2014.

Midfielder Erin Geiger, from Pride SC (Colorado), committed to Texas for the class of 2014.

Forward Ashley Pankey, from Match Fit Chelsea, committed to Kansas for the class of 2013.

Monreau DeVoas, from Grand Rapids Crew Jrs, committed to Wake Forest for the class of 2014.

Shea Newman, from FC Stars of Massachusetts, committed to Virginia for the class of 2014.