So Cal Blues excel before heading to college Keeping with this week’s theme of signing day, it is only suitable to focus on the So Cal Blues U18 Girls from the Southern California Regional TeamRank. 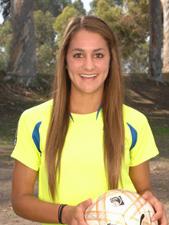 Lauren Bohaboy
Ranked number one both in the national and regional rankings, So Cal Blues are the current U.S. Youth Soccer National Champions, and have been very successful this season. The team has won the Surf Cup, So Cal Blues Cup, Surf College Cup, and finished in the top three of the Coast Soccer League Premier table.

“We have tried to create a positive environment and a family situation here,” Head Coach Randy Dodge said. “I have coached these girls since they were 12 years old, and we haven’t brought any new players the last three years.”

Their recent victory at the Surf Cup has given the team an unprecedented five consecutives Surf Cup victories.

“This is a great group of girls that have excelled. They have the attitude that they will not lose, and fight to win at every game and at every practice,” Dodge said. “All the girls are going to top Division I schools across the country.”

Forward Lauren Bohaboy, who Dodge considers the best frontrunner in the country, will be headed to Notre Dame while Kaylie Davidson will play for Navy.

Midfielder Haley Rosen and defender Kaitlin Dickmann, the stalwart in the backline, will be going from teammates to adversaries. Rosen will be going to Stanford and Dickmann is heading to California.

Miranda Cornejo won’t be far from home, playing for UC Santa Barbara. On the other hand, Kelly McCormick will be protecting the pipes as Mississippi’s newest goalkeeper.

Having dominated fall tournament play, So Cal Blues now will strictly be concentrating on trying to qualify for regionals and earning a chance to defend its national crown.

As for the other girls age groups, San Diego Surf leads the U13 and U17 divisions, Arsenal FC heads the U14 and U16 lists and Real So Cal tops the U15 Girls.

Among the boys, South Bay Gunners SC leads the U13 Boys table; Cosmos Academy West tops the U14 Boys, and San Diego Surf heads the U15 Boys. Albion SC has pulled away from the U16 Boys, while Central California Blues leads the U17 Boy and United FC the U18 Boys.