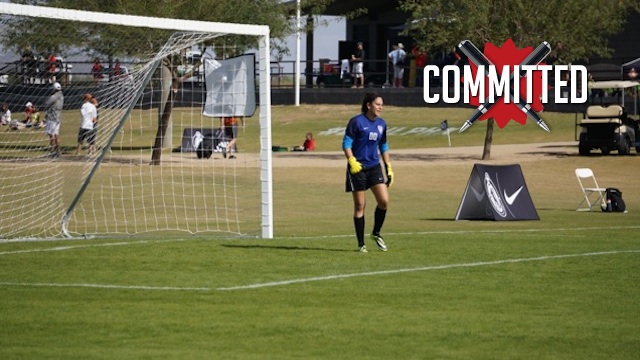 The Pac-12 is loaded with talent, and it’s perhaps more top-heavy than any conference in the nation. With Stanford and defending champion UCLA restocking for deep postseason runs, the Huskies are aiming to get back into the race by building on their seven-win season from 2013. The year ended with a loss to Washington State on the final day of the regular season, and solid recruiting will form the backbone for future success.

That’s where Siena Ruelas comes into frame. Ruelas, who plays for the Strikers FC’s U16 side, recently committed to Washington for the class of 2016. Ranked No. 51 in the talented SoCal pool of players, Ruelas’ ability to fly off her line and command her area made her a prime target for the Pac-12 school as a prospect for the future.

For Ruelas, the opportunity to face some of the best the nation has to offer in conference wasn’t the only draw. Seattle’s ample surrounding wilderness and natural beauty played its part.

“I had visited several schools, yet none left the impression like Washington did,” Ruelas told TopDrawerSoccer.com. “UW had everything that interested me. From my major, to the great facilities, beautiful location and outstanding program, I realized that Washington was the total package.”

Ruelas will get another glimpse when her Strikers FC side invades Seattle later this month at the ECNL Playoffs. Her ability on the back line helped Strikers to a 12-6-4 record and led a defense that kept opponents to just 20 goals in 22 games.

“Aside from being a DI and Pac-12 school, I really enjoyed the sense of loyalty, faith, and love amongst the athletes and coaches,” Ruelas said. “I also liked the fact that the coaches and the athletes treated one another like family.”

Jordan Malone is a versatile holding central midfielder who can flex back into central defense in a pinch without losing a beat. That versatility and rising ability with her Eagles SC side in SoCal helped guide her recent commitment to Big 12 program Kansas.

“The campus and surrounding area is beautiful,” Malone said. “The school has everything I wanted. Good soccer, a lot of majors, school spirit, a lot of academic support, a family atmosphere and their other sports are highly regarded.”

Malone chose Kansas over Oregon State, Cal Poly and Denver, and will join in 2016 with an eye toward building Kansas for the future. The Jayhawks finished 7-11-2 last season and won just two Big 12 games, but a recent string of talented players and commits lends credence to the idea that coach Mark Francis and his staff are slowly building from the ground up. Malone is now part of that vision.

“(Francis) is what lured me to the program,” Malone said. “He was a former player at the highest level, he has a lot of college success, and I feel that he can help me become a better player and teammate.”