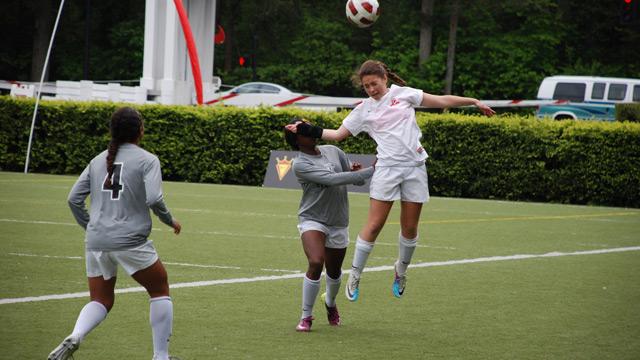 The Carmel Valley Manchester Academy girls will compete in the Gothia Cup in Gothenburg, Sweden, July 17-23, and the Cosmos Academy West 96 boys will be at Old Trafford in England for the Manchester United Premier Cup, August 3-6.

The teams navigated 4 group-stage matches Friday and Saturday (all matches here are played with 20-minute halves, a common format in European tournaments), plus quarterfinals and semifinals on Sunday.

Both teams came out looking to score early. Arsenal had a shot from a corner saved in the first minute, and at the other end, Carmel Valley Manchester United’s Kirsten Mcbeain saw her right-footed effort just high in the second minute. 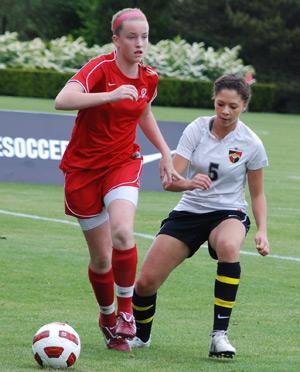 Deidre Bradley of Penn Fusion (left) looks to pass.
Arsenal looked to find target player Stacie Moran and combine with Maegan Gibson and the occasional latent back player joining in the attack. Arsenal were the more dangerous on set pieces, and each team went into the half three to four passes good on any attack.

About seven minutes into the second half, Crystal Cordova entered for Carmel Valley and seemed to make an immediate impact. Her searching cross moments after checking in promised to add a dynamic to the CV Manchester Academy attack, and after she played Dominique Diller in near full time, Diller’s shot rattled off and over the crossbar, nearly putting a sure end to the question of who would score the one needed goal.

Though both CV Manchester Academy’s Natalie Saddic and Arsenal’s Gibson showed moments of individual flair throughout that could have led to their own or a teammate’s goals, the keepers were destined to have the final say in this match. After two scoreless 5-minute overtime periods, penalties decided the victor.

The standard 5-round penalty shootout passed, and all was tied at 3 each. Both round-6 shooters made their shots, but CV Manchester Academy’s Melissa Lowder made a save in the top frame of the seventh round. That set the stage for Gianna Montini to calmly slot a ball into the lower left corner of the goal and send her team off to Sweden.

It was a shame to see the end of such a hard fought, entertaining match. “Both teams were fighting the whole way through, said CV Manchester Academy coach Felicia Kappes. “It was the battle I thought it would be.”

For the eliminated teams, it was day of friendlies. For PDA and Cosmos Academy West, there would be only the showcase match, with a trip to Old Trafford on the line.

PDA arrived by winning a semifinal versus fellow Golden Staters Real So. Cal (3-0). For Cosmos Academy West, they had to outlast Dallas Texans S.C., beating them 2-0 in the Sunday semifinal.

Early on, Cosmos seemed more game to the task, attacking through brilliant midfield combinations and the individual play of Edgar Murillo. It seemed the #7 left-footer would play a role in the match’s first points, as his 30-yard shot in the fifth minute promised he’d be a danger. Aside from Murillo’s service on set pieces and a flurry of shots off a broken corner—finally ended by a save from PDA’s Cameron Zell, neither team threatened to change the score in the first half.

The second half started much like the first. Murillo seemingly had Zell beat to the far post in the second minute, but Zell lifted the ball high and out of danger, leaving Murillo and the Cosmos only a corner to show for their efforts. As the half progressed, the field opened up. The early dominant midfield play by the Cosmos gave way to steady counter attacks as PDA began to ask questions of the game. PDA had been patient, waiting to find the right time to strike, and they were nearly rewarded at the thirty-first minute when Yannick Ntone Kouo’s right-footed shot forced Cosmos Kris Guerra to make a save.

The rest of the match and overtime saw fewer chances, and as time wore on, it was clear this final was going the way of the girls’.

The first 8 shooters on each team made their penalties, and Caleb Calvert’s conversion to the top left corner of the net proved to be the clincher for Cosmos, as moments later Cosmos keeper Guerra turned away a would-be tying penalty.

And like that, Cosmos are off to Old Trafford. “I’m so happy for them,” Cosmos coach Teddy Chronopulous said of his team. “Both teams showed a lot of fire, a lot of passion.”

At the respective trophy presentations, the Golden Boot for each group was also awarded. Nash Popovic’s 6 goals for Vardar was enough to earn him the honors on the boys’ side, and Dallas Texans S.C.’s Brittany Crabtree took home the girls’ trophy, also with 6 goals in her tournament account.