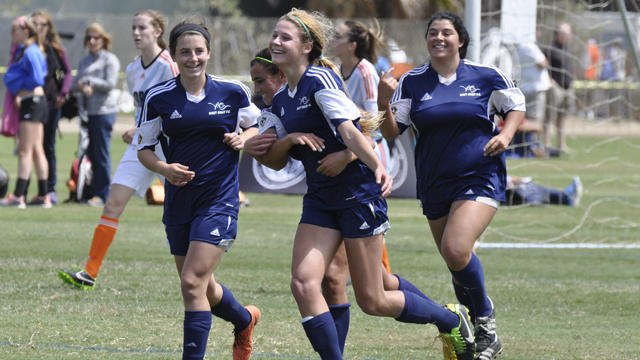 Outstanding soccer action today at ECNL San Diego as more than 500 college coaches scouted the top U14 to U18 female players in America. ECNL Commissioner reported a total of154 teams are participating at the Del Mar Polo Fields in this major ECNL event.

Top teams travel from all across the country to play tough matches. De Anza Force’s national championship GU15 team coach Andres Deza says it best, “We are here to play much more competitive games than we are exposed to in our conference. Here is where the top teams come to be challenged.”

The top game of day was a U15 match: Northern California’s De Anza Force vs Southern California’s West Coast FC. The battle that took place offered non-stop action for the packed sidelines of college coaches scouting top players. While many other games played today had a clear victor from the start, the action in this match ranked near pro-level with steady back and forth action.

De Anza is ranked as the second place team in the national standings and are the defending champions for this age group lost to Southern California’s West Coast FC 3-1.

With neither team dominating possession – each team are clearly used to the pleasure of controlling the ball - the final score did not reflect the consistent combat on the field.

West Coast FC took the early lead when Madison Bennett benefitted from a misplayed header and volleyed a shot past the De Anza Force goalkeeper for the opener. Force responded with a tally from Reina Bonta, who tucked away a rebound after De Anza hit the crossbar twice in the span of ten seconds.

West Coast FC had the bevy of chances in the second half and scored the game-winner off a free kick. Sophia Serafin headed home Marissa Cordero’s delivery for West Coast FC’s second goal of the game and Serafin’s ninth of the season. West Coast added an insurance goal late when Bennett was taken down in the box on a rash, poorly timed challenge. Remy Mathews converted the kick from the spot.

Prior to the game, De Anza Force had only given up one goal in ECNL play this season so the trio of goals was a stark contrast to the normal results for the defending ECNL national champions.

U14 Recap:  Top of the Northwest Conference table is Vadim Tolstolutsky’s Crossfire Premier who deftly maintained possession of the ball and defeated Joe Birklid’s Washington Premier 3-1.

Tomorrow West Coast FC’s takes on Crossfire Premier at 2:45pm and this will be one to watch. Both teams sit in the top 16 spots in the Champions League qualification with WCFC at No. 14 and Crossfire at No. 15.