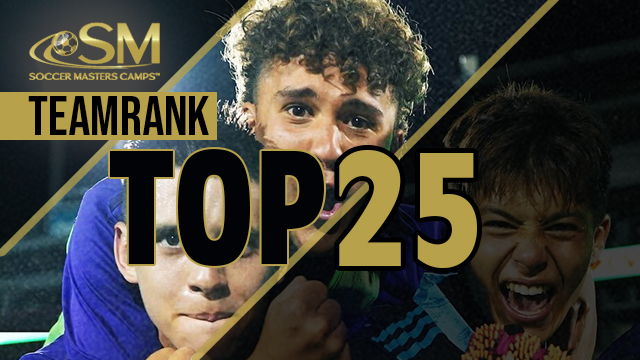 With the kick off of a new club season, TopDrawerSoccer unveils the first edition of the Soccer Masters TeamRank for the 2021/2022 club season. The debut ranking is for the U18/19, U17, and U16 age groups for boys club soccer.

The initial ranking is heavily dependent on last season’s successes. The championship teams from the various leagues find spots in the Soccer Masters TeamRank Top 25. Check out the rankings for each of the three age group below.

One of the stories of the U18/19 age group over the last few years has been the absence of MLS academies from this platform. MLS franchises are prioritizing moving players into their second teams (USL level) rather than the oldest age group in the club game, which has left this age group as a bit of the dead zone for MLS academies. There are still a few in the mix, but traditional club soccer powerhouses in hotbeds are back on top in this age group and should be in the running for the national championship in the respective leagues.

Check out the full rankings in the U18/U19 age group.

Real Salt Lake’s success at the U15 level last year propels them to the top spot for the initial ranking, but this figures to be one of the most competitive age groups in boys club soccer this year. Most MLS academies spent the summer scouting and adding to their teams for this year’s campaign. Philadelphia Union signed one of the top players from last year’s MLS Next Playoffs to help bolster the roster for this season. Orlando City and Sounders figure to be in the mix as well.

Check out the full rankings in the U17 age group.

All four of the semifinalist from MLS Next playoffs last season at the U15 level do not have a team at the U16 age group this season. Many MLS teams skip the U16 age group and push the players up to the U17 level, which leaves a bit of a gap here. De Anza Force won Surf Cup over the summer and had a strong showing last season with this age group. Force is the top team in the first ranking.

Check out the full rankings in the U16 age group.