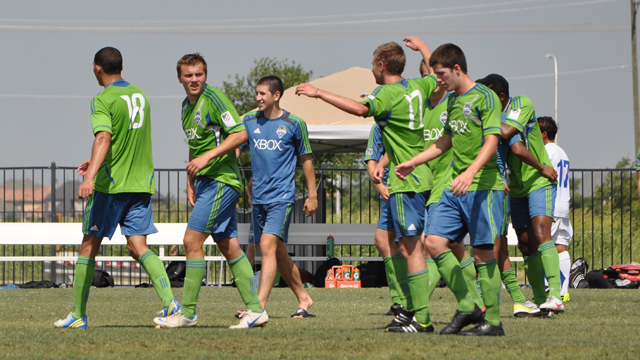 On a crisp mid-March evening in 2009, the Seattle Sounders played their first game as an MLS club. The roaring throng of 32,523 — the first of many sellouts — heralded the coming of something big in Cascadia, a thunderclap of emotion that shook the league down to its foundations. 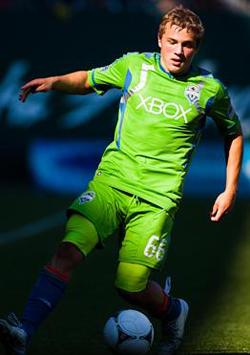 Amid the heaving mass of green beamed out to the country on ESPN2 that night was a 14-year-old kid named Jordan Morris. His dad, Michael, had been the team doctor since the club's NASL days, and at the time Morris was merely a Sounders super fan playing club soccer on the side. He cheered Seattle's 3-0 win over New York Red Bulls like everyone else.

Cut to four years later and the fast-rising Morris, 18, is poised to tear through the curtain to the other side. In his first year with the Sounders, the rocket-fast forward scored 27 goals in 28 games for Seattle's U18 academy team this season. That includes a standout performance at the Development Academy Playoffs in Frisco last week to help the Sounders push through to Finals Week in Houston later this month.

That came on the heels of Morris' surprise call-up to Tab Ramos' 35-man U20 World Cup roster in May. Morris didn't make the final cut for the trip to Turkey, but considering he only made the commitment to the Sounders less than two years ago, Morris counted any experience he could get as a net gain.

"It's been a little bit of a roller coaster ride," Morris told TopDrawerSoccer.com. "It's been an adjustment, but it's been a great year. We've done well. I think over the past year, with the help of the coaches and my teammates I think it's been a great development experience to play for this team, and I just really appreciate it."

Thanks to his dad's position with the club, Morris was a known quantity from the time he was a boy. He played with a local club called Eastside FC through his U17 year until Morris finally decided to approach Sounders' U18 academy coach Dick McCormick, a former Sounders player himself. McCormick knew Morris well. Morris' dad performed McCormick's knee surgeries during his playing days, and Morris' Eastside club had played another club McCormick coached in the past.

So when Morris finally made the decision to switch to the Sounders last year, McCormick was ready. And he knew what he was getting.

"Jordan's been fantastic," McCormick said. "He's a great kid. He's the captain of the team, his work ethic is fantastic, he doesn't complain. You very rarely see a kid with that kind of pace and power and skill in one package. You're guaranteed to see a lot more of him down the road."

An admitted late bloomer, Morris tapped his prodigious physical abilities once exposed to the Sounders' wealth of academy talent. A striker who's often deployed wide right, Morris tends to drop into the midfield before ripping off rampaging runs that allow him to burn past defenders and into the box.

Being in Seattle's system wasn't just a dream come true for Morris. It was an ability to hone his enormously deep bag of tricks.

Ramos took notice, calling Morris into the side that traveled to the Toulon Tournament in France in May just before the World Cup. Morris played in three of the U.S.'s four games at Toulon, often deployed on the right and clocking more than 100 minutes on the field.

Morris admitted his disappointment at not being picked for the final 21 for the World Cup just weeks later, but it did allow him to cleave a mile-wide path at the academy playoffs.

"When I first got the initial call I was really surprised," Morris said. "It wasn't really on my radar at all. But I was really excited. I've wanted to be a part of that for a while. I really have to thank the coaches for even giving me an opportunity to be there. When I didn't make the final cut I was a little disappointed of course. I think going to the World Cup would've been an amazing experience. But going into the tournament over in France, my goal was just to get seen and get some caps, and that's what happened. It was a really exciting experience."

Morris is heading to Stanford in the fall, and he says he's committed to getting an education. But if a homegrown contract came along? Morris might not balk.

"I've talked to the coaches a little bit, but I'm definitely going to Stanford next year," Morris said. "Just going to see how it goes from there, see what comes up. But I'm definitely committed to getting an education too. Just have to balance that out a little bit and see how that goes."