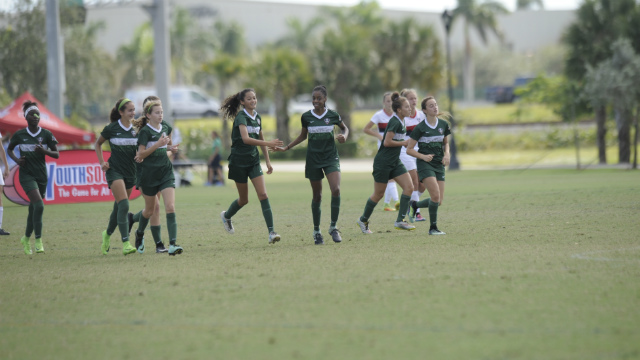 BOCA RATON, Fla. -- Sophie Castro (Arlington, VA) came off the bench to score the lone goal in the 58th minute to give the East their first win of the event with a 1-0 win over the West in the 2004s game.

Like many of the players at this week’s US Youth Soccer ODP Girls Thanksgiving Interregional, Castro was asked to play positions different from what she plays at the Lee-Mount Vernon Soccer Club. It was the third day of play in Boca Raton, Florida and featured players from the 2003 and 2004 birth years.

“I am normally an offensive player,” said Castro, 13, who played defense in the team’s first game and both wing forward positions in the win over the West. “Over the summer, I played offense and I came back for this and I was a little lost playing outside defender. My defending skills weren’t that great. But when they put me on offense, I felt like I was home.

“It’s great to be versatile so like if a player gets hurt, I can go in there and play,” Castro added. “This is really important to me. I am happy I came because it is a really good experience and there are a lot of (college) coaches here so it is good for my future. And you make new friends.”

East coach John Ciano said Castro came in as an outside winger and thought she did a good job of making some very dangerous runs behind the defense. He said her impact on the game was felt.

“This being the first year for these girls we have really focused on the experience and really soaking up everything from the moments together in the hotel to learning from each team we played,” Ciano said. “We have asked a lot of girls to even play out of position. In training, we focused on a lot of roles and responsibilities within 11v11. I think the girls have been open-minded and really adhering to what I have asked of them.