RICHMOND, VIRGINIA - A talented Real Colorado team was very close to victory in the U13 Championship bracket final at the Jefferson Cup for Girls, but a last-gasp goal from Spirit United’s Megan Giannopoulos sent the match into overtime, and the Philadephia-area team scored two more in the extra session to win the match and the tournament.

It was a match too good to let regrettable confrontations between players, coaches and even parents detract from it. Both teams created a number of scoring chances and showed a lot of commitment despite the match being each team’s 4th in two days.

The quick and clever Giannopoulos and her partner at forward Bryce Watts, were dangerous throughout the match. They combined to nearly give Spirit the team in the opening minutes, but Real defender Ashlyne McComb was able to prevent the goal by clearing the ball off the line. McComb was good throughout the game, putting in some good tackles and marking well. 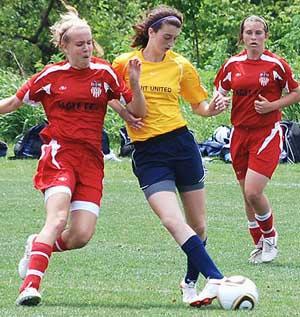 Spirit United's Cecilia Knaub (yellow)
Watts and Giannopoulos created another chance minutes later with the former pushing a shot just over the bar. Spirit’s Haleigh Echard then came close, but her shot was deflected wide by Real goalkeeper Kailee Sharp.

As the half went on, Real began to gain more control of the game and this was due in large part to the midfield ball-winning of Alexius Hill. Hill covers a lot of ground and knows how to tackle and win possession without fouling. She was excellent on the day.

In the 2nd half, Spirit’s Echard had another close call, sending in a shot from a wide angle that Sharp had to be alert to push wide of the post.

But it was the Colorado side that would get on the board first. On a free kick from her team’s end of the field, Amy Alexander did well to win the ball, created just enough space for herself and then launched a well-placed 30-yard rocket into the back of the net for a 1-0 Real lead. Alexander was very dangerous through the match, with good footskills, the strength to hold off challenges and a nose for the goal.

Alexander ripped a similar shot later in the half, but it was well held by Spirit goalkeeper Kaelyn Johns. Spirit’s Cecilia Knaub had a free kick from a dangerous spot, but it was blocked by the Real wall, then Michaela Moore hit a shot over the bar from long distance.

Spirit was pouring on the pressure as the 70 minutes wound to a close. Giannopoulos won a corner and Marissa Sheva, excellent all day at right back, sent in a good corner that Sharp did well to punch out. Real countered and Alexander set up Hill for a shot that just missed the target.

Then Spirit won another corner and Sheva sent in another good corner, but this time it found Giannopoulos who volleyed home from inside the 6-yard box for a last-minute equalizer.

The first 5-minute OT period went without incident, but in the 2nd 5 minutes, it was Sheva who again caused a scramble in front of goal with a well-placed corner, and Giannopoulos scored from close range. Bryce Watts then put the match away with an excellent effort, cutting inside from the left and rifling a shot into the back of the net.

Spirit coach Juan Lazares credited Real with being an excellent team and also his group for sticking to their game plan.

“Sometimes a little luck can help too,” he said. “With us it’s not so much about defending as it is about having the ball and attacking. If we can keep the ball, that’s a good way to defend too.”

“We have a lot of heart,” Watts said. “We don’t play just for ourselves, but for the team. For each other.”