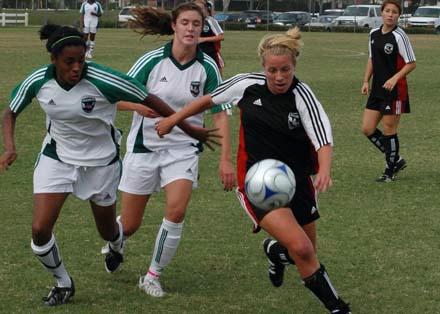 CORAL SPRINGS, FLORIDA  - The 1995 birth year players took the big stage here Monday at the U.S. Youth Soccer ODP Interregional, introducing themselves and their abilities to a host of watching college coaches while encountering some high-pressure situations.

Add to that high heat and humidity in south Florida and you have a fairly combustible mix on the playing field. Still, a number of players managed to make a very good first impression on those watching.

Region IV 95s 3, Region I 95s 1
The Region IV 1st half forward line put on a good display of attacking soccer, forging a 3-goal lead that Neil McGuire’s squad would not relinquish on the day.

Elizabeth Boon of the Washington club Columbia Premier scored the 1st and 3rd goals for the westerners. The opener came early after Havana McElvaine had made a good run down the right and sent a ground cross through the 6-yard box to where Boon ran onto it and finished. The latter goal was a 35-yard lob as Boon deftly placed the ball over the goalkeeper and under the crossbar.

In between, Avalanche Premier’s Emily Bruder scored a good individual goal, cutting through the Region I defense on the dribble before slotting home from inside the penalty area.

The 2nd half was much different as a number of Region I subs stamped their imprint on the game, none more so than Boston area attacking midfielder Amy Yang, who showed great imagination and skill both on the dribble and with her passing. Yang definitely changed the complexion of the game, giving the Region IV defense and midfield much more to contend with and less confidence about getting forward. 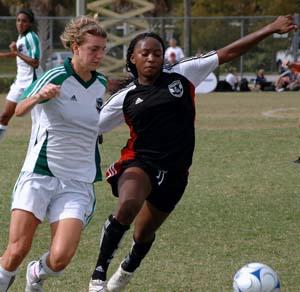 ODP players compete in Florida.
Yang helped create the lone Region I goal, winning a ball in the forward third against a much bigger player (most everybody on the field was much bigger than the diminutive Yang) and playing a clever pass down the wing for Sasha Gray, who played an accurate flighted cross for Mount Laurel United striker Brittain Dearden, who headed the ball into the back of the net to make it 3-1, which was the final scoreline.

Region IV’s Boon was good at holding the ball up in attack. Her good touch on the ball augmented her exceptional soccer intelligence. Lamorinda United midfielder Claire Winter played a commanding role in midfield for Region IV, adding vocal leadership to her high work rate and intelligent positioning. She was supported in that task by Surf’s Ana Cruz and Eastside United’s Aurora Bodenhamer.

For Region I, Penn Fusion left back Kendal Robino combined good reads and steps to the ball with an aggressive attitude to show well. Right back Zoe Clark was quick and showed an ability to serve the ball into dangerous spots with accuracy. Blackwatch Rhode Island midfielder Shae Newman was good on the ball for Region I as well.

Each year at this event some new players step up and command the spotlight with their performance. One along those lines this year will surely be Region III forward Ariel Kupritz. Kupritz’s style of play as a 2nd half substitute inspired visions of Barcelona superstar Lionel Messi, as she bobbed and weaved her way through the Region II defense on more than one occasion, showing incredible vision and close control, with one such run resulting in a highlight-reel goal that put her team up 1-0 in the 2nd half.

“I learned to play this way from my dad, who played in South Africa,” Kupritz explained. “He has taught me how to run at players and control the ball and it definitely is a more fun way to play.”

What made Kupritz’s performance more remarkable is her revelation that she’s coming off a broken leg suffered this summer at the regional camp, and just now getting full mobility and fitness. While she is struggling at this point to go 90 minutes, she showed an ability to impact the game more in 20 or 30 than some players do in a full match.

Region II had a more workmanlike but also impressive 2nd goal near the end of the match, with Hailey Brohaugh sending in a bullet cross that CASL’s Claire Wagner met with an exquisite volley from inside the area, leaving the keeper with no chance and leveling the score at 2-2.

In between Region II recorded a pair of soft goals, with Lauren Knight and Ashton Miller getting credit on the scoresheet for their long-range efforts.

Region III 1st half goalkeeper Olivia Liebman was sharp, commanding her area and coming off her line well, along with providing vocal organization and leadership to the defense. CASL defenders Wagner and Dominque Babbitt, plus Mississippi Fire converted center back Hailey Brohaugh had good efforts on the day, while Florida right back Taylor Campbell-Phipps was perhaps the fastest player on the field, which helped her track back very effectively.

If Campbell-Phipps isn’t the fastest on the team then it’s probably Mississippi Fire right wing Marion Crowder, who was running riot down the right wing in the first half, beating players and sending some effective crosses in that unfortunately were not finished by teammates.

For Region II, Nebraska midfielder Elizabeth Bartels showed good feet and made a lot of intelligent decisions on the ball. Team Chicago center back Jenna Romano reads the game well and has the speed to keep up with opposing forwards. Eclipse Select’s Angela Waddle has very good feet, which help her to exhibit great technical speed and accurate passing. Michigan Hawks’ player Lianna Simms is a tough tackler in midfield who also marks well.

Region IV 94s 3, Region I 94s 0
In a match that overlapped with the 95s play, The westerners won on goals from Kodi Lavrusky, Isabel Farrell and Alex Anthony. We will watch and have coverage of these teams when they play Wednesday.

Region III 94s 1, Region II 94s 0
Space Coast striker Jackie Stengel scored the 2nd half winner for the Southeastern side. We will watch and have coverage of these when they play Wednesday.