Stanford gets another 2013 blue chip recruit If you read last week’s edition of commitments – or, frankly, any week prior to that – you’ll know exactly what we’re talking about.

The Cardinal has struck gold again with the verbal commitment of elite prospect Amber Munerlyn, ranked No. 6 in our 2013 Top 100.

Munerlyn, of the So Cal Blues, is a dynamic young striker with limitless potential. She brings equal parts athleticism and technical ability to the table, can score goals in bunches and create problems in 1v1 situations.

We’ve watched Munerlyn closely in various U.S. Youth National Team camps and she never fails to electrify with her speed and skill. Now, Stanford has managed to recruit her promise to its stable. 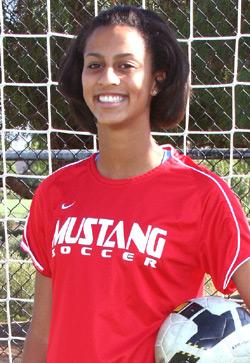 Ryan Walker
“I choose Stanford because I loved the campus and the school itself, the academics are great, I like Paul (Ratcliffe) as a coach, and it’s the perfect distance from home,” Munerlyn said.

Munerlyn also strongly considered USC and North Carolina (another strong 2013 player), but in the end she flocked to the destination that seems to hoarding many of the blue chip 2013s.

“It impacted my decision (that a lot of great players were going to Stanford), but only a little bit,” Munerlyn said. “It’s always good to know who you will be playing with.”

One player Munerlyn could find herself sharing the field with is current Mustang SC striker Ryan Walker, yet another 2013 that has made her verbal commitment to Stanford.

Ranked No. 9 in our Northern California & Hawaii Region, Walker comes from a great club environment and has enjoyed strong success against top competition. She’ll be a player worth keeping an eye on in the coming years.

On the 2012 side, superstar Brittany Ratcliffe has long verbally committed to Virginia. Ratcliffe is the No. 20 ranked player in our Top 100 and a standout with all the accolades. She’s a fast forward who plays hard and will make an immediate impact at the next level.

Other commitments this week include:

Kelly Fitzgerald (So Cal Blues) has verbally committed to Stanford for the 2013 season. Fitzgerald is ranked No. 16 in the So Cal Region

Valerie Margerum (Lamorinda United) has verbally committed to Oregon State for the 2012 season.

Samantha Potoczak (Excalibur Soccer Club) has verbally committed to Lafayette for the 2012 season.