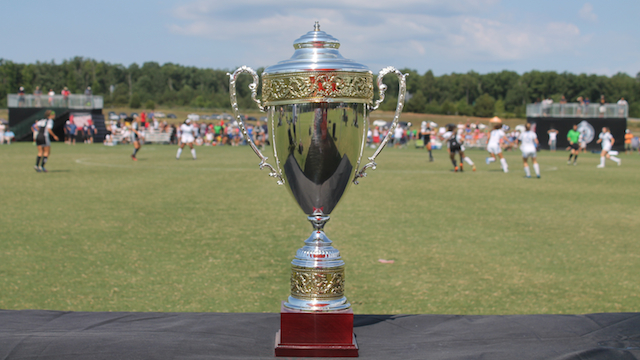 RICHMOND, Virginia — Antonio Pecorari paced the grounds of the West Creek Soccer Complex uneasily. The Dallas Sting U17 side he coached into the ECNL Finals were playing in the title game without him, a product of a red card he received in the semifinal. Cast from the sideline to take in the game with the spectators, Pecorari couldn’t bring himself to watch the second half.

So he paced, sometimes all the way to the nearby highway. Too nervous to watch and knowing his team held a slim 1-0 lead, he endured an agonizing wait for the sound of the final whistle. When it finally came, a jubilant pack of Sting players sprinted down the touchline to greet Pecorari, who could finally pry his fingers from his eyes. The Sting were national champs.

“It got to the point that I said that I had to go for a walk, and I prayed all the way down,” Pecorari said. “Every minute I was looking at my watch.”

Sting completed a rare unbeaten season by trumping Chicago-area side Eclipse Select 1-0 on ECNL’s Championship Thursday. That gave Pecorari his second unbeaten national title with Sting after guiding a group of 1995’s to the title, and this one was as impressive as any. Dallas stormed through the finals in Richmond with 13 goals in four games, all wins, and it conceded just two.

Eclipse pushed Sting as hard as anyone. Dallas Sting got the game’s only goal inside the opening 20 minutes on a rebound off a free kick from defender Hannah Fernandez, which she deposited into the roof of the net. The game turned into an even contest fought mostly in the middle of the field until Eclipse upped the intensity over the final 15 minutes. While Sting frantically tried to clear off attempt after attempt, Eclipse drummed balls into the box in an effort to equalize.

They came close a number of times, but second-half keeper Katherine Lund made two acrobatic saves to secure the shutout, and the defense never cracked. That left a team that hasn’t lost since last year’s postseason with the U17 trophy at season’s end.

“It was tough, and the girls fought hard and deserved the win,” Pecorari said. “I’m so proud of them.”

Eclipse U16s go back to back

Every team that wins an ECNL national championship quickly discovers the road to the trophy is paved with the bones of some of the best talent in the nation. So to win two titles in a row is a feat indeed. The Eclipse U16s can now place themselves in that prestigious category.

After winning the U16 championship in 2013, Eclipse did it again this season, finishing off the Dallas Texans 3-1 on Thursday in a vibrant display to hoist another trophy. The teams went into the half tied 1-1, but second-half goals from Lea Waddle and Marissa Bosco iced the game to put the cherry on a unique season. Eclipse became the second team to repeat this season after the PDA U18 side did it in Seattle in June.

“Winning one in this league is hard enough,” Eclipse coach Rory Dames said. “Last year everything kind of fell into place for us. This year, we started off with losing (Courtney) Daugerdas to an ACL, a month after that we lost Abby Dein to an ACL, and then about two months ago we lost (Mikaela) Niermann to an ACL. And that was one of our starting forwards, one of our holding mids and one of our outside backs. So other kids had to step up.”

That forced Dames to get creative with his lineup, and one of his shrewdest moves was moving Alia Martin back into a role as a holding midfielder. Martin was rampant all week, and her ability to sweep away attacks was a major reason why Eclipse got through.

As for Thursday, Eclipse bagged the first about 20 minutes in when Bosco ripped into the box and drew a penalty that Martin converted. Texans answered 15 minutes later when Texas(w) commit Haley Berg found a pocket of space just outside the box and beat keeper Stephanie Rodriguez to the corner. It was the Eclipse defense’s only lapse.

Eclipse finally found the breakthrough halfway through the second half when Zoe Redei’s pinpoint cross hit Waddle in stride, and Waddle bundled it inside the near post. That was ultimately the winner. The insurance goal came with about 15 minutes left when Bosco’s sidewinder threaded through a thicket of legs to push Eclipse to its second consecutive title. The program was only narrowly denied two titles on one day in the following game.

San Diego Surf U15 cashes in on talent

There are few teams in the nation that boast as much talent as does Surf, which surrounds phenom forward Catarina Macario with the pieces to win for years. They used that talent to go unbeaten in Richmond and beat PDA 1-0 on Thursday to win the U15 national championship.

The Surf stopped 2013 national champion De Anza Force in their first match of the tournament, and they used that to fuel a run that took them all the way to the trophy. On Thursday, Grace Carter snuck underneath a corner kick just five minutes into the game, and the goal stood up as the match’s only tally. Much of that was down to a defensive shape the team’s been dedicated to ironing out for months.

“For the month between the end of the season and (the ECNL Playoffs) in Seattle, all we did was work on our defensive shape,” said Surf coach Mark Spooner. “I knew if we’d be hard to break down then we’d have a chance at winning a national championship.”

For PDA, it was a bitter pill to swallow. They lost to De Anza Force in the U15 final last year, and many of the same players returned for another shot at glory. This time, it was another California team stopping their hopes a step short of a trophy they’d chased all season.

The Surf were able to withstand a late push from a PDA team that hadn’t lost a game all season, and as a result they’re headed back to SoCal with a shiny new mantlepiece.

“The girls have responded to it,” Spooner said. “It’s been unbelievable.”