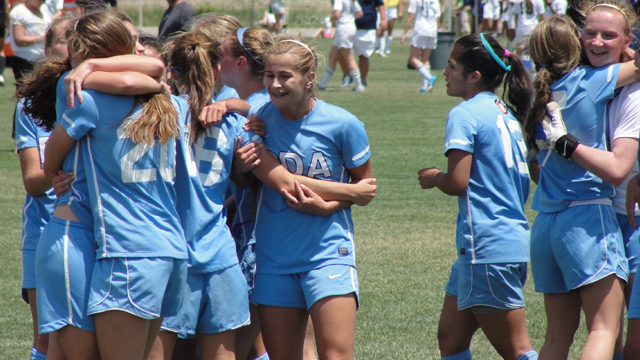 AURORA, Colorado – The ECNL Playoffs for the U15-U17 age groups were scheduled to end on Sunday at the Aurora Sport Park, but Mother Nature had other plans.

A lengthy lightning delay prevent the elite girls club soccer league from completing its final set of games Sunday evening prompting the league to postpone the games until Monday. 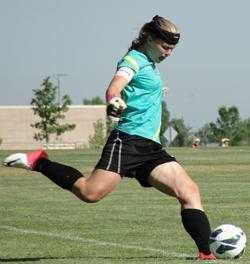 Prior to the weather obstruction, there were some teams that booked a trip to Richmond, Virginia and the ECNL Finals, which will kick off on July 10.

Concorde Fire used the same game plan in every match at the ECNL playoffs, and it paid off in spades for the Atlanta club, which advanced from a tough group to book its place in Richmond.

It was Brooke Colangelo who broke the deadlock with a thunderous strike on a free kick from 20 yards out in the 15th minute that proved to be the game-winning goal for Concorde.

Hawk put pressure on in the second half, as the Michigan club needed a win to top the group and move onto the next round, but Concorde’s center back pair of Emily Macuga and Mikella Rodriguez did not budge an inch and kept the shutout thanks to some solid play from goalkeeper Mikayla Krzeczowski as well.

In Group B, a thrilling show played out in the final games as Dallas Texans and San Diego Surf ended the competition even on all tiebreakers for the first place in the group, which meant it had to be settled on penalty kicks. Texans came out on top in the kicks from the spot and clinched the position in Richmond.

Miranda Schulz scored twice and Slammers FC sealed its place at the ECNL Finals with a 2-1 win over Dallas Texans.

Schulz opened the scoring in the third minute after a splendid assist from Kiana Palacios.

Texans answered with a goal from Rice(m) commit Samantha Chaiken off of a corner kick. Dallas appeared to have the lead when Brooke Hartsock ripped a shot from outside the box, but it smashed off the crossbar.

Schulz finished the game-winning tally 15 minutes into the second half when she snuck in behind the defense on a saavy diagonal run and then slipped the shot past the keeper.

“We tried to take the game to them and we fortunate to get the early goal,” Slammers FC head coach George Larsen told TopDrawerSoccer.com. “The early goal meant Dallas needed two.”

Larsen credited the depth of his squad for the success that they enjoyed in Colorado.

“We built this team with depth, and it was the depth that carried us through these three games,” the coach said. “That was really the way we solved [the altitude and heat]. Even today, in a must-win game, we used 17 players in the first half and 15 players in the second half.”

Joining Slammers in the Finals are Dallas Sting, AHFC, Real So Cal, PDA, and West Coast FC. The winner from Group B is still to be determined.

The Group A winner came down to the clash between PDA and Michigan Hawks on Sunday at the Aurora Sport Park. The two squads both finished in the top 10 in the national standings during the regular season, so the fixture figured to be of a high level and the teams did not disappoint.

Hawks grabbed the lead in the first half when Jamie Cheslik put the final touch on a cross from Megan Buckingham.

Meaghan Mulligan scored the equalizer for PDA on a controversial penalty kick call in the second half. Mulligan nearly scored the go-ahead goal in the 72nd minute when she hit a laser from the top of the box, but it smashed off the crossbar.

Hawks had a good chance at the game-winning goal in stoppage time when Ashton Miller rose above the defense for a header, but her effort went off the post.

PDA advanced as group winner based on goal differential. VSI West FL Flames, Sporting Blue Valley, San Diego Surf, and Dallas Sting join the New Jersey club in the trip to New Jersey. The winners from Group E and F are still to be determined.

The U18 semifinals both were interrupted by the weather delay with the scores level in the games. TSC Hurricane took a 2-0 lead early, but Colorado Rush bounced back to get the game square at 2-2 with about 10 minutes left before the lightning delay.

It was a similar story between Ohio Premier Eagles and CASL. Eagles scored in the first half on a long goalkick that was flicked on to Bailey Wilson who raced past the defense and finished around the keeper.

CASL equalized in the second half when Alexis Degler headed home a service from Joanna Boyles.