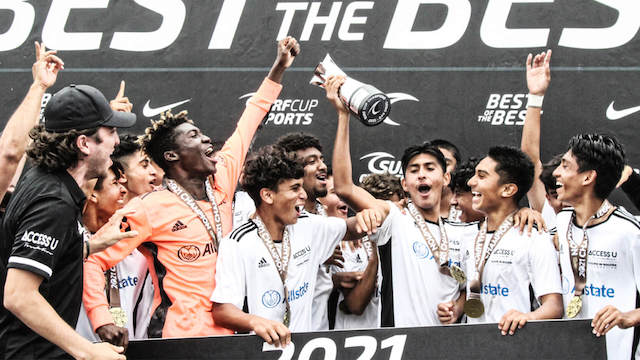 The 2021 Surf Cup wrapped up on Monday with the championship games from Southern California. Crossfire Premier ECNL put in a dominant performance in the U19 Boys Best of the Best bracket for the week. Crossfire went through the competition without conceding a goal, and scoring 20 goals. Crossfire claimed the title in that age group with a 1-0 win over Atletico Santa Rosa Manchester United.

Among the other noteworthy stories from the tournament, Access U YSF won the Boys U17 Black championship. Access U YSF is a combination of two programs that were brought together to help a group of players get exposure at Surf Cup. ACCESS U Foundation is a non-profit organization designed to inform underserved Hispanic & Black players and their families about collegiate athletic scholarship opportunities and the college recruiting process to help them achieve their educational goals. Since its launch, ACCESS U Foundation has supported more than 60 players in their college recruitment and mentorship process. Yours in Soccer Foundation’s (YSF) mission is to empower exceptional scholar athletes from underserved communities by leveraging the potential of sports to realize their college dreams. The team went through the event with five wins, 16 goals scored, and 0 goals conceded.

Check out the standouts and highlights from the other age groups at the Surf Cup older weekend.

RSL-AZ ECNL defeated De Anza Force MLS Next 1-0 in the Best of the Best Championship. RSL-AZ went through the competition without conceding a goal, which included four wins over fellow ECNL sides before topping the MLS Next club from Northern California in the championship game.

San Diego Surf ECNL won the Best of the Best bracket in the U15/2007 age group. Surf rolled to the title with a 5-1 win over De Anza Force. Boca OC won the Super Black bracket with a 1-0 victory over Crossfire Premier ECNL 2 in the championship. Rebels SC Elite won the Super White bracket with a 1-0 victory over Hawaii Rush. WSC Crush defeated San Jose Surf NPL in the Black bracket championship.

Legends FC ECNL defeated Slammers FC 1-0 in the Best of the Best championship game. Marin FC won the Super Black bracket with a 1-0 victory over Heat FC in the championship. Grace Thao had a strong showing for West Coast FC as she had three goals and two assists in three games. Hawaii Rush won the Super White bracket in a PK shootout over Clovis Crossfire.

San Diego Surf cruised to the title in the U16/2006 age group. Surf beat Slammers FC Koge 3-0 in the championship of the Best of the Best bracket. LA Breakers were the top team in the Super Black bracket. Breakers topped Hawaii Rush in a PK shootout in the semifinal and then defeated Rebels in the final.

San Diego Surf also won the Best of the Best bracket in the U15/2007 age groups. Surf defeated Crossfire Premier 4-1 in the title game. ISC Gunners won the Super Black bracket championship in the U15 age group over Seattle United.