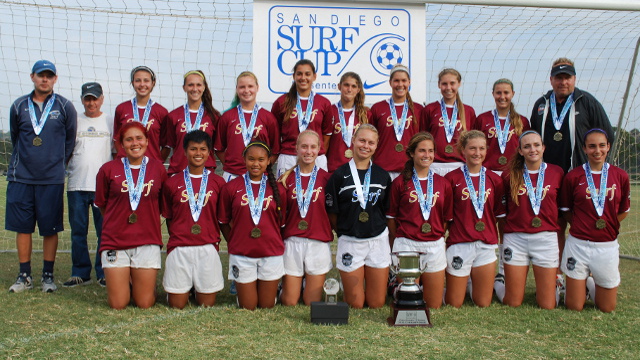 For the San Diego Surf U17 Girls team, a trip to last season’s ECNL National Finals was a good accomplishment, but not good enough.

Coach Ada Greenwood keeps pushing to team to improve itself, player by player.

“I feel we can be good enough to win at nationals and I’ve told them that,” Greenwood said. “But I’ve also told them there a lot of good teams and a lot of challenges along the way to reaching that place. I preach to them at every training session, ‘This is an opportunity to improve yourselves. You will never get this practice back, so you have to decide how good you want to be.  I coached a player like 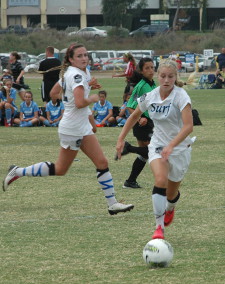 Rachel Buehler for a long time, and you could tell that kid was going to go a long way. When she made a mistake, you could tell it meant something to her, and now she’s winning the Olympic Gold Medal. That’s what you need in a team to make it to the top.”

With a 3-1 record, Surf is tied atop the So Cal Conference standings with defending national champion Slammers, who they lost to 2-1 a couple of weeks ago. The team also took 2 of 3 wins at the Phoenix Showcase in September, and won the Surf Cup at the end of the summer.

“We lost to MVLA (in Phoenix) and we didn’t show up to play, but MVLA was a better team than us. The Slammers game was a coin flip. We could’ve won, they could’ve won,” Greenwood said. “Our team is very good. We have a good back four, an exceptional goalkeeper, some creative midfielders and a couple of special frontrunners.”

The forwards are Pilar Torres and Stanford-bound Kyra Carusa, who Greenwood described as having “ next-level” pace and good with both feet. Left-sided midfielder Abigail Callahan is a creative attacking force, and Arielle Schechtman is one of the best 2014 goalkeepers still on the board according to Greenwood.

“The schools have used all of their money and here is this excellent goalkeeper still out there. Someone will get her and be very happy,” he said.

Greenwood said it will be his task to help the team realize its potential.

“My challenge is to put more depth in the squad and make it more competitive,” he said. “When they want to bring it they are as good as anybody out there. They have fitness, a lot of talent, and creativity.”

Surf’s next match is Sunday at home vs. Arsenal FC.