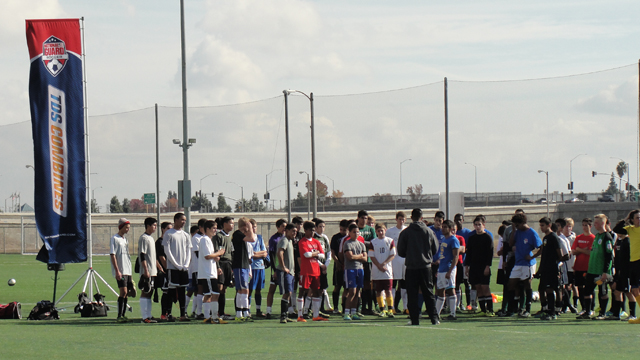 Here are the best XI and other standouts from the event.

GK Paul Lewis, Seattle Sounders, 2016 – The Sounders Academy goalkeeper drew remarks for his presence in goal as well as his ability to take feedback and improve his game. Lewis also made some big saves during the full-sided games, which drew the attention of some coaches.

D Noah Sonenstein, San Juan SC, 2018 – Sonenstein is a center back with a good head who earned attention for his quality in the tackle and in the air. Coaches also remarked about his leadership and communication in keeping the team organized.

M Giovane Lobo, FC Los Angeles, 2016 – Lobo was one of the standouts from the event thanks to his passing ability and his performance in the full-sided games. Lobo showed a lot of potential in his game for the collegiate level.

M Issa Badawiya, FC Golden State, 2017 –Badawiya drew the attention of the coaches thanks to his soccer mind, which helped him stand out during the small-sided games. He entertained the coaches and fans with his quality on the ball.

M Barbod Noorabadi, FC Barcelona (CA), 2017 – Noorabadi’s ability in tight spaces earned some remarks from coaches. The midfielder has good technical ability and sees the game a step or two ahead of most from his age group.

M Brian Vang, Minnesota Thunder, 2016 – Vang’s composure on the ball was one of his qualities that stood out from the Combine. Vang made good decisions with the ball and helped his teams succeed in the full field games.

M Logan Greene, Cal Elite, 2015 – Greene earned plaudits for his work ethic as one coach remarked that he “was one of the hardest working players” from the Combine. His determination on the field was contagious and helped him standout from the crowd.

M Asa Silverman, LA Galaxy, 2016 – Silverman was creative on the ball and savvy with keeping possession for his squad. He combined well with his teammates and helped break down defenses with his decision-making on the ball.

F Micah Albert, San Juan SC, 2016 – Albert’s athletic qualities drew the attention from the coaches on hand. One coach remarked that he is “a very talented player, both physically and technically.”

F Spencer Tidball, FC Los Angeles, 2016 – Tidball was one the top forwards among a loaded class of attackers at the Combine. Tidball’s quality on the ball and efficiency in front of the net earned the most remarks from the coaches.

F Isaak Her, Minnesota Thunder, 2016 – Her was one of the best at the Combine in his ability to beat defenders on the dribble. He also excelled when he was under pressure and kept the ball with ease.