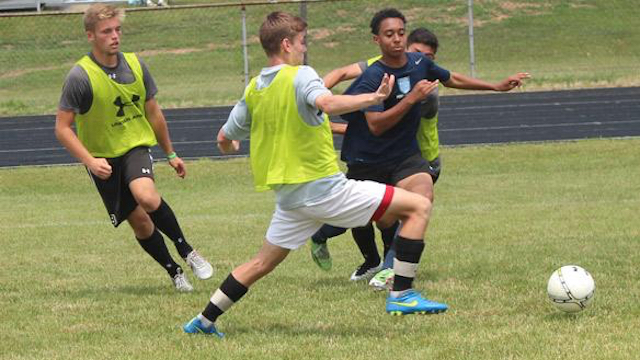 It was a beautiful, sunny day for the second annual New England combine at the Citizen Bank Fields at Progin Park. Quality players worked with great coaches in an intimate environment.  Quality was evident in all players, but these are the ones who shined a bit brighter on the day-

Logan Leppo - Lawrence Hamnett SC - Goalkeeper - 2017 - Leppo is a fearless keeper that has the drive and determination to excel at the next level. He is somewhat unorthodox but incredibly effective. He is strong when coming off his line and has springs in his legs. He throws his body in to every challenge and is a presence coming off the line, especially for his size and age.

David Grana - Revolution Empire - Defender - 2017 - David is very confident on the ball and is great at connecting with teammates.  He is a solid option either on the outside or in the center.  Throughout the combine, David was a presence on the back line through his physical play and talkative nature.

Brett Mozarsky - Everton FC Westchester - Defense - 2017 - Mozarsky showed extreme amounts of confidence in every situation that was presented. He is an excellent communicator, constantly giving decisive and direct instructions to his teammates. His best attribute may be his 1v1 defending, but is no slouch when going forward.

Bryce Scofield - Bridgeport FC - Defender - 2016 - Scofield was the best center back at the New England combine. He has all of the physical tools to make a smooth transition to the college game. He won every high ball that came his way and was also strong going shoulder-to-shoulder and in sliding tackles. Even in situations which looked like he may come out second best, his determination and physical prowess allowed him to come out on top.

Nicholas Kriak - Parsippany SC - Defender - 2018 - Kriak is a confident, silky player that commands respect beyond his years. He was constantly moving throughout the day, showing great fitness and a great brain that allowed him to make smart runs. Every touch and movement that Nicholas made was fluid and confident. Not only is he a solid defender, he also had a great goal following an assist from fellow NE Best XI star, Christiano Di Silva.

Gabriel Agbim Jr. - Met Oval- Midfielder - 2018 - Agbim is a solid all around midfielder. He was calm and confident on the ball, constantly moving the play from side to side.  His first touch was clean and well calculated. With continued practice and growth, Gabriel will make a solid collegiate player.

David Bettenhausen - Continental FC DELCO - 2016 - Bettenhausen was the best central midfielder, and best player, at the New England Combine. He was confident going forward, creating multiple chances for himself and his teammates. He is a true leader and midfield general, cut from similar cloth of a Michael Bradley. He is all around box-to-box midfielder and capped his combine with the best goal of the day, a rocket from the right side to the far upper V which gave the keeper absolutely no chance.

Poom Mera - Global Premier Soccer - Midfield- 2017 - Mera is a silky, creative midfielder.  His touch is always calm and calculated.  He is deceivingly quick over the first 5 yards and has the ability to slide past defenders a la Andres Iniesta. Mera finished cleanly following the best team passing movement of the day, which he both started and finished.

Alex Rivera - Mass Premier Soccer - Midfield - 2017 - Rivera showed his versatility by playing in multiple positions during the full field scrimmages, including outside mid and forward, but truly excelled when put in the center of the pitch. He linked well with his teammates and was a physical presence on the defensive side of the ball. Rivera’s day would have deserved his place in this Best XI based on his technical and physical abilities, but he went ahead and scored from a corner.

Victor Jeronimo - Garden City Park SC - Forward- 2018- Jeronimo is the definition of a hard working team player. He is willing to chase lost causes and put the opposing team under constant pressure. There was no one at the combine that worked harder than Victor. He also has the skill to back it up; he had a brilliant flick during his full field scrimmage which was the assist of the day!

Cristiano Dasilva- AC Connecticut - Forward - 2018 - Di Silva showed great speed and determination throughout the combine. His speed allows him to pull away from even the fastest of defenders, especially in the open field. He showed great ability to finish and backed it up with a selfless nature that is difficult to find in strikers.Di Silva’s best assist of the day came from a flowing move when he could have easily shot, but made a smart, pinpoint accurate pass to a teammate.