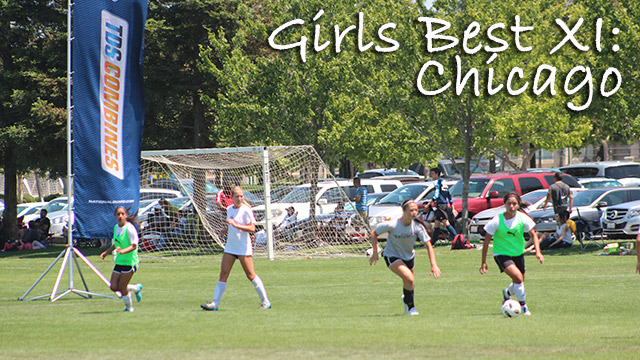 Last month, the TDS Combine Series headed to Olympic Park for its second annual Chicago event. There was an array of talent on display, and coaches from junior colleges, NAIA, Division 2 and Division 1 schools in attendance trying to catch a glimpse of the local standouts.

From the event, the TDS staff along with the college coaches picked a Girls Best XI, sponsored by National Guard.

Jennifer Wandt – Goalkeeper – FC Wisconsin Eclipse – 2017 – Wandt has a great build for a goal keeper, and great hands. She is very comfortable with the ball at her feet – her teammates felt confident in playing the ball to her and starting from the back. She communicates well with the back line. Wandt also produced the save of the combine toward the end of the day, with a shot coming from distance she back peddled to magnificently tip the shot onto the bar.

Camille Papelera – Defender – FC United – 2015 – Papelera is a midfielder by trade but spent a lot of her time at the combine impressing the college coaches at left back. Short but strong on the ball, she showed her competitive nature through 1v1s often coming out on top. In possession she played simple and read the game very well.

Alyse Dutcher – Defender – Sockers FC – 2016 – Dutcher is a great athlete, strong and quick. She is a natural ball winner on the floor and in the air, always flying hard into every challenge. She did a great job maintaining possession and playing good balls through the midfield to start the attack.

Hailey Blanchard – Defender – Eclipse Select – 2018 – Blanchard really impressed with her flair going forward as a wing back. Her athleticism allows her to work up and down the line, and really penetrate at speed.  She played some great balls down the line to the winger and continued to join in. Defensively she is strong and rarely beaten. She had one of the highlights of the day with a nutmeg pass that drew some gasps and cheers from spectators watching on the side.

Mikaela Hoard – Midfielder – FC Wisconsin Eclipse – 2017 – Hoard is a solid attacking player, playing in the more advanced midfield role. Positive in possession she is constantly looking to go forward either on the dribble or with a penetrating pass. Her movement off the ball and her desire to be involved led her to be very influential throughout the combine games.

Lauren Welker – Midfielder -  St Louis Gallagher – 2018 – Welker spent most of her day playing as an old fashioned winger – high and wide. She worked well defensively and showed great speed and stamina to work up and down the line. She was exciting to watch on the dribble in the final third, and kept it simple and safe in possession in her own half. She played some good through balls and was constantly looking to create chances from wide positions.

Brynn Miller – Midfeilder – Eclipse Select – 2018 – Miller is a center mid who is not scared to hussle and pick up the pieces for her team. In possession, she had a high pass completion ratio, played some good through balls and spread the play well. Her most noticeable attributes other than her passing abilityies are her ability to direct the players around her and lead, as well as her contagious competitive fighting spirit.

Sofia Pavon – Midfielder - FC United – 2015 – Pavon was desecirbed as “one of those players who just makes things happen” by the coaches. She impressed with her composure on the ball, and ability to influence the game in the final third.

Alondra Arreola – Midfeilder/forward – FC Athletico - 2018 – For a 2018 graduate, Arreola is very tall and very strong. She has fantastic feet and vision, and was most effective in the “10” when she had no defensive duties. As Arreola progresses and she picks up good fitness and speed she will definitely be one to watch, as she is capable of magic in the final third.

Corel Carmichael – forward - Athletic Jaier FC – 2015 – Carmichael scored a screamer from outside the box, putting her goal scoring abilities on display for all to see at the combine. Composed, extremely strong and confident on the ball, she can play as a target striker or on the through ball. Her ability to run through players and use her strength effectively, created many goal scoring opportunities for herself.

Victoria Thornton – Forward – Sockers FC – 2018 – Thornton is an attacking mid/forward and every attacking play seemed to have her involved. Tall, quick, with a great touch and fantastic with her back to goal. She had some great finishes on the day - a bottom corner finish from inside the box and she also followed in a long distance shot to snap up the rebounds after a great save from the goalkeeper. She surely will have many colleges waiting to snap her up.