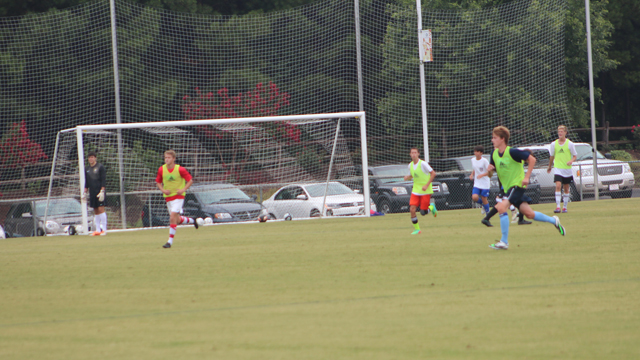 Taking place once again at WakeMed Soccer Park, the 2ndannual TDS Raleigh Combine showcased the Southeast’s finest.  Scouts on hand to assess talent included coaches from all over the south and east coast.

With over 80 TDS Combine alumni now committed to play in College, the program is proving to pay dividends for many young players.

Interested in getting on a National Guard Best XI list from a TopDrawerSoccer Combine? Check out how you can get seen at any of our 3 remaining Combines in 2014 here.

The following are the boys who stood out most in Raleigh.

Reid Hunter – South Carolina United Battery – Goalkeeper (2015)  - Hunter came up with some big saves throughout the day. Has a good size and frame that will help him succeed as a goalkeeper at the collegiate level. Footwork is solid, and is a great athlete.

Camden Harrison – Capital Area Railhawks Academy – Defender (2016) – Harrison showed how intelligent of a player he is on the day. Has a good technical foundation, which allows him to play out of the back, and take his space going forward when necessary. Strong in the tackle, and will make a very solid defender at the D1 level.

Grant DuPertuis – Concorde Fire – Defender (2015) – Brilliant first touch under pressure. Has the versatility of being able to play as a center back or as a right back. Good size, and does well in the air.

Harry Adanuty - Capital Area Railhawks Academy – Defender (2016) – Great man marker, and can really take players out of games. Closes down well and has a good engine to him.

James Shealy – South Carolina United Battery – Defender (2018) – Shealy is a young defender who really gets his angles right. Steps at the right times, and keeps a tight line with his other defenders.

Tyler Fewin – Charlotte Soccer Academy – Midfielder (2016) – Fewin’s ability to sit in front of a back 4 and link the defense with attack is his biggest asset. Plays quickly and simple, and has the ability to get out of tight spaces easily. Makes everything easier for his teammates. Calm and collected on the ball, he is a tremendous player. Leads by example.

Jake Gusler – North Carolina Fusion – Midfielder (2018) – Gusler has outstanding vision on the ball for a player his age. Very comfortable on the ball, and always seems to make the correct decision and pass. Enjoys pulling the strings as an attacking midfielder, and looks to be on the path to developing into a very good player.

Connor Jones – Capital Area Railhawks Academy – Midfielder (2016) – Jones was very impressive with his touch in tight spaces. Great on the ball, and is a natural fit as a central midfielder.

Jack Maher – St. Louis Scott Gallagher – Midfielder (2017) – Maher reads the game very well, and provides excellent communication in a team. Has a good range of passes in his locker, and can probably play as an outside midfielder or perhaps as a winger. Good skills 1 v 1, and can put in a good cross.

Alex Rose – Capital Area Railhawks Academy – Forward (2017) – Has the skills and the frame to be a very good target forward at the next level. Has good size, and can hold the ball up and bring other players into the attack. Has a good first touch that sets him up to play quickly. Great decisions on the ball, and made some great runs into space.

James Kasak – SOCA – Forward (2016) – Kasak’s a confident player on the ball, and can strike the ball well. Good finisher, and uses his body well to protect the ball. Has good speed to separate from defenders, and has the potential to make an impact at the D1 level.