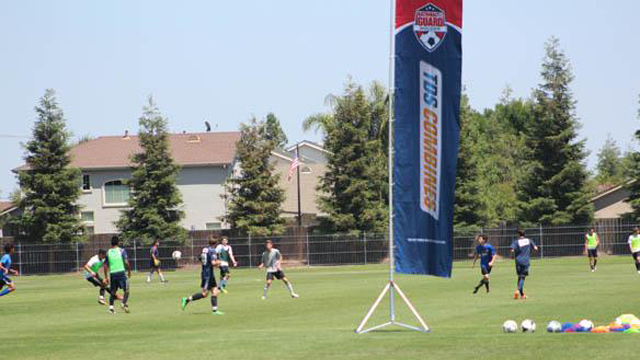 The TDS Combine series stopped in a wet and windy Dallas to host its eighth event of 2014 on Nov. 22. With players and coaches from near and far in attendance, the level of play and competitiveness was exceptional at the Dallas Combine.

From the Combine, the TDS staff along with the college coaches picked a Boys Dallas Best XI, presented by National Guard.

GK Adrian Sanchez, Andromeda SC, 2015: Sanchez has good size and technical base for a goalkeeper. He showed his shot stopping abilities with a variety of low and high diving saves during the full field games. He was one of the most confident and consistent goalkeepers on the day with the ball at his feet. He communicates and organizes well.

D Edgar Rodriguez, Georgetown Force FC, 2016: Rodriguez has a great technical foundation and did well breaking out of the back with overlapping runs. He provides a great outlet out of the back and has the ability to beat players on the dribble and pick out good passes and crosses. Defensively he is solid and consistent.

D Brenden Kolthoff, St Louis Scott Gallagher, 2015: Kolthoff was described by his coach at the combine as “as tough as nails”. Like his defensive counterparts he is built to be a physically imposing defender and has a great feel for the game. He is technically very good in possession.

D Chad Sahinkaya, Dallas Texans, 2016: Sahinkaya is a nationally (No. 126) and regionally (No. 9) ranked player and he brought his A game to the Dallas combine. He stood out as one of the best defenders on the day. With his towering presence in the air, he seemed to win everything that came his way. He is built to be the perfect center back: hard in the tackle, smart and so composed on the ball. Played one or two-touch out of the back throughout the full field games and set the tempo for his team.

D Andrew Grimmer, Solar Chelsea SC, 2016: Grimmer is a smart defender who is fully committed and strong in every tackle. On the ball, his passing is sharp and crisp.

M Luis Carrillo, Dallas Texans, 2017: Carrillo is another nationally ranked (No. 84) player to land in our best XI. Like his counterparts in this midfield, he is very gifted technically and composed on the ball. His first touch and passing abilities are a pleasure to watch.

M Jorge Burke, Georgetown Force FC, 2016: Burke is an attacking center mid, who is sharp and quick on the ball. He has the ability to dribble out from the midfield and can pick out short and long passes with ease. He is composed on the ball and rarely gave up possession.

F Jared McCullough, Dallas Texans, 2016: McCullough has great physical attributes as a forward and has a natural instinct to seeking out opportunities. He found himself in fantastic goal scoring opportunities throughout the full field games.

F Damian Bell, International FC, 2016: Bell is a fast and crafty player. He likes to drift out wide to receive the ball and beat players with his tight control and pace down the line. He likes to cut in and get shots off in the final third and play low crosses across the goal. He had a cheeky nutmeg in 11v11 to beat a player down the line.

F Jared Stubblefield, Solar Chelsea, 2015: Stubblefield is a strong, powerful forward who keeps things simple with the ball at his feet. He has the ability to run at players and also play with his back to goal and bring others into the game. He showed glimpses of brilliance, winning a 50/50 challenge on the halfway line dribbling past the last man and hitting a great strike that smashed the crossbar.