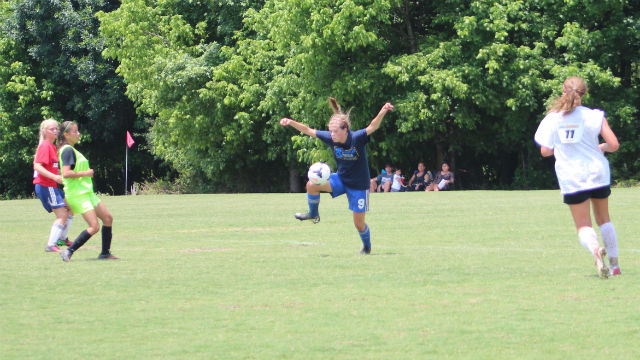 The Wake Med Soccer complex in Cary, NC played host to TopDrawerSoccer’s second annual Raleigh combine in mid-July. The day started off wet and windy, but that did not prevent top D1, D2, D3 and NAIA programs from along the East Coast coming out to take a look at players from all over the US.

After a huge success in its first year the Raleigh combine did not disappoint in the second year, with the highest number of college coach attendees and a large number of very talented players on both the boys and girls side coming out in full force.

TopDrawerSoccer has picked a best XI for the girls, presented by National Guard.

Elizabeth Baeza – West Coast – Goalkeeper – 2016 – Baeza was one of the eldest keepers at the combine, and definitely showed her experience commanding her box. She has great footwork, and is extremely comfortable and confident coming off her line. Her decision making and execution under pressure set her apart from the other keepers.

Kacie Kinley – Sporting Blue Valley SC – Defender – 2017 – Kinley is built like an old fashioned center back – tall and strong. She is great in the air, and won the majority of headers she went up for. The most impressive aspects of Kinley’s game are her ability to read the game and her decision making both defensively and offensively. She cut out trouble, and had fantastic vision and confidence to pick out the right passes out of the back at the right moments.

Remi Roberts – Charlotte Soccer Academy – Defender – 2017 – Roberts like Kinley is tall and strong, and extremely athletic. Rarely do you find a player who is so sharp over the first few yards, as well as being able to beat there opposition in a 20 yard sprint so comfortably. On the ball Roberts is composed and keeps it simple.

Kayla Morrison – FC Virginia – Defender – 2016 – Morrison is a quick defender who likes to break out of the back. The more offensive of all 3 defenders in the best 11, she likes to burst forward with the ball at her feet and playing quick one twos with the midfield. Morrison’s maturity in picking the right moments to break forward really helped her shine.

Emma Sosinski – Charlotte Soccer – Midfielder – 2016 – Sosinski, a regionally ranked player, dictated the midfield and tempo of every game she played in throughout the day. A central midfielder who likes to float around the middle third, win balls, and play simple passes. She showed sharpness over a few yards to win loose balls, and switch possession at the right times. Her most impressive element is being able to slow or speed the game up when in possession.

Kaitlynn Johns – Texas Rush – Midfielder – 2019 – Johns was one of the youngest attendees at the Raleigh combine, entering into her freshman year next year. Johns was able to hold her own and stand out against players five to six years older than her. With great natural ability to read the game, paired with her technical ability and physical attributes Johns most definitely has a very bright future ahead of her.

Morgan Drawdy – Northwest United FC – Midfielder – 2017 – Drawdy is one of those midfielders who can provide you with moments of pure creativity and unpredictability. One of the most technically sound players at the combine, a great communicator and decision maker on the field, Drawdy really stood out. She covers a lot of ground getting box to box, and has a good speed of play.

Carlee Allen – Lonestar SC – Midfielder – 2018 – Allen ranked #15 in Texas, showed her ability to impact each game from midfield. Like the other midfielders within the best 11 Allen is extremely comfortable in possession, but always looking for that final penetrating pass.

Kursten Von Klahr – Charlotte Soccer Academy – Midfielder - 2018 – Von Klahr, a regionally and nationally ranked player produced some great attacking play through the midfield. Fast in possession, Von Klahr likes to burst forward with and without the ball to join the attack. The majority of chances for her team came through Von Klahr.

Delaney Borror – Jacksonville FC – Midfielder/forward – 2015 – Borror plays in front of the midfield and just behind the forwards in a number 10 role. She was different to most forwards on the day as she tended to keep everything 1 or 2 touch, moving the ball quickly and patiently in the buildup. She has the ability to play with her back to goal, and her movement caused a lot of problems.

Victoria Riggs – Jacksonville Area SC – Forward – 2017 –Riggs is a well-rounded forward, who has the ability to dribble out of tight spots. Her explosive runs on and off the ball, made her a nuisance for defenders throughout the day. Riggs worked tirelessly for the team closing down the defense from the very first to the very last minute of every game, sometimes resulting in creating chances out of nothing.