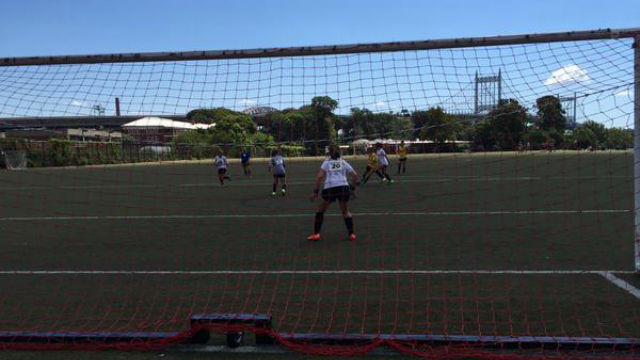 The last TDS Combine of the summer series was the fourth annual Tri State event, held at Randall’s Island in New York City. Behind a beautiful backdrop, a host of talent competed under the watchful gaze of college coaches from across the region.

Below is a look at the girls Best XI from the event. If you’re interested in competing in front of college coaches at a TDS Combine event in 2015, sign up for one today.

GK Rachel Colt, PDA, 2017 – Colt has great size and a big presence in goal. She was explosive on the dive, showed steady hands while making strong saves. The most impressive part of her game is her communication and organization of the back line. She knows exactly what she wants and delivers the message effectively. Her confidence oozes into the defense.

D Taylor Curcio, Massapequa SC, 2018 – Curcio is a short and stocky center back, who showed her physical strength both on and off the ball. Though smaller in size she won a lot of balls in the air. She stepped and read the play well, dribbled out of the back to connect with midfielders and forwards.

D Maggie Pierce, CASL, 2019 – Pierce sees herself in the Best XI for the third time this year. Her versatility and maturity for her age again proved an impressive quality to the coaches. Technically solid, athletically gifted, she was effective on and off the ball throughout the day.

D Michelle Money, Ellicott City Soccer Club, 2018 – Money has also become somewhat of a veteran Best XI represetnative. Having made the Best XI in DC, she once again showed her quality at the back during the Tri State Combine. A smart player who reads the game well to step, and is aggressive and strong in the tackle. In possession, she is simple and effective.

M Samantha Mazula, Continental FC Delco, 2018 – Mazula spent most of her day out on the left wing, and proved a nuisance for every backline. She hustled high up the field to win the ball back for her team, played some great through balls and took players on down the line. She has a great passing range that she demonstrated early on with a fantastic cross-field switch.

M Ciarra Snyder, Penn Fusion, 2017 – Synder is a smart, technical center midfielder. She moves the ball well, switches the play, and constantly wants to be involved – never shies away from the play. She created a few shooting opportunities that tested the keeper.

M Ashley Pyne, PA Rush, 2017 – Pyne like Synder is smart and technical. She sits a little deeper and plays in more of a 6 roll, switching the play well. She tends to keep the ball moving side to side and doesn’t take many risks.

M Danielle Etienne, Bethesda SC, 2019 – Etienne was one of the most effective players on the field throughout the full field games. Hard into the tackle, very technical, she is electric in possession, breaking out of the midfield taking players on and connecting with the forwards. Every attack moved through her.

M Kelly Amador, Yardley Makefield Soccer, 2017 – Amador is a tidy player with a fantastic passing range. She showed great decision-making, knowing when to keep the ball and when to release quickly, creating a lot of opportunities for her team in both instances. She was able to slip a lot of through balls into the forwards, with disguised passes on the dribble. She has good speed.

F Corinne McDonald, PA Rush 2017 – McDonald was a workhorse up top, closing down the defense and creating opportunities for herself. She is physically very strong and holds up the ball well, and her vision allows her to then bring others into play. She had some very good moments up top.

F Gina Peraino, Continental FC Delco, 2018 – Peraino is a forward with tidy feet, and showed some great far post finishes during the 1v1 technical sessions. She moved into space well, making smart runs, and had some great opportunities in front of goal.