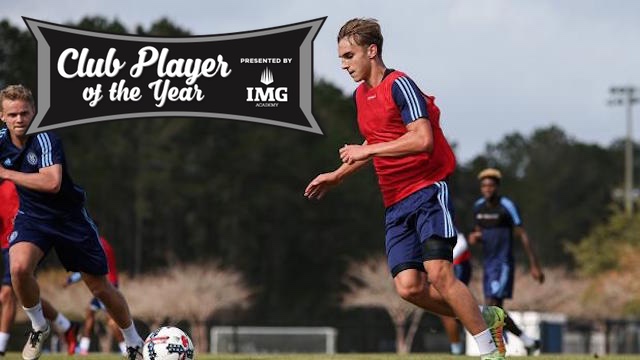 The race for the TopDrawerSoccer.com Player of the Year Award presented by IMG is heating up. And you need only look at the stacked cast of potential winners for proof.

As a reminder, the award, the most prestigious yearly honorific for amateur youth players with U.S. ties, will honor one top girl and boy player each at the conclusion of the season. Announced each August following a July 31 cutoff, the award takes into account the player’s body of work over the previous season and will be picked by an internal panel of judges.

Past spotlights: Sanchez, Rose make waves | Can Kunga, Tagliaferri rise to the top?

We’ve already taken a look at two sets of major players in the race. Today, we turn our gaze to a rising star in the Big Apple and a monumental talent with a year of club eligibility left. Can either take home the hardware in August?

Of all the players up for this year’s TDS Player of the Year honor, James Sands might’ve had the most interesting start to 2017 of any of them. He was included in Patrick Vieira’s first team NYCFC preseason roster for a trip to Ecuador, and he ultimately got some game experience against Ecuadorian powerhouse Emelec in a hostile environment. By all accounts Sands acquitted himself well and earned rave reviews from Vieira himself. His star immediately shot into orbit.

Sands remains an amateur, but one wonders for how long. He’s spent the majority of his recent time apart from NYCFC’s U16s and in U17 MNT residency, where he’ll help close out the program as part of its last ever class this spring. In the meantime, Sands has gotten call-ups to U17 MNT camps and remains a likely featured piece of the World Cup qualification team for CONCACAF.

Sands has largely been a center back on the national team level, but Vieira, himself a defensive midfielder in his heyday, moved him upfield as a No. 6 on the club level. It’s likely in the latter role that he thrives at the next level (whenever that Homegrown deal arrives), but either way, few young players are having a better year than Sands.

To start, any women’s player with “North Carolina” next to their commit is worth paying attention to. But Brianna Pinto is a special case even within that special designator. Pinto has the look of one of the most special recruits to cross into UNC coach Anson Dorrance’s domain in a long time, and she’s already making good use of her penultimate club season. She might not hit the college game until 2018, but at least based on her 2016-17 season, she looks ready yesterday.

Pinto’s found time with her ECNL club side CASL to be a bit more truncated than normal thanks to routine national team call-ups at a variety of levels. Most recently, Pinto starred for the U23 WNT - yes, a college-aged national team - at just 17 in a 2-1 win over the Portland Thorns in a friendly. But perhaps most notably, she earned a call-up to the full USWNT in January to participate in a camp as one of the youngest players in the program’s history to have that honor.

Needless to say, the Tar Heels can’t wait to get Pinto on campus.

Pinto’s position at the next level is up in the air, and it largely depends on UNC’s need. They could form her into a raiding winger or a second striker. She’s had several multi-goal games for CASL’s prolific U18 team this season, and there are few in the country with a higher potential ceiling than the five-star talent.