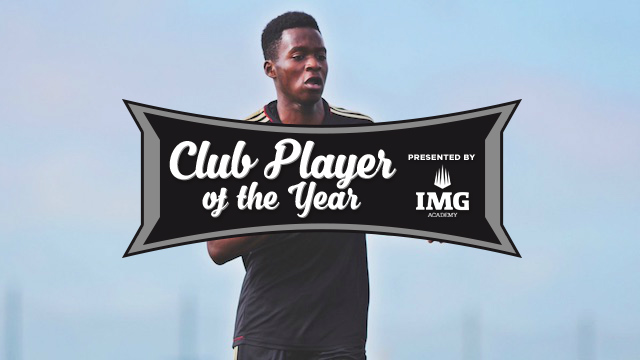 When it comes to grading the top individual seasons in American club soccer, this season is proving to be an especially stacked cast of contributors.

This year’s TopDrawerSoccer.com Player of the Year Award presented by IMG is winding toward its ultimate conclusion with the final vote from our panel of judges to come later this summer. In the meantime, we’re monitoring and breaking down the merits of each of the top amateur U18 and under players in the country. How was their club season? What about on the youth national team level? Are they changing games for their teams?

This is the second year for the award, and we’ve already hit something of a critical mass in terms of quality.

In our first look under the hood this year at a couple high-end boutique prospects cutting a wide swath through their U18 years, we broke down the merits of CASL’s Alex Rose and So Cal Blues mega-prospect Ashley Sanchez. This week, we turn our attention to two other deserving candidates who could well hoist the trophy when the winners are announced come August.

There was some level of surprise around the TDS offices when Lagos Kunga came good on his Furman pledge on 2017 Signing Day. It wasn’t that Furman wasn’t a quality destination, but Atlanta United had spent the previous six months putting its best academy players under a seriously intense microscope. After signing two, Kunga was one of seven academy kids invited to preseason training with the full team. With Atlanta United so willing to pursue its academy kids, Kunga’s days as an amateur seemed numbered. So when he didn’t sign (yet, anyway) and announced his formal commitment to Clint Dempsey’s former school, it was huge news.

In the meantime, Kunga’s been arguably the DA’s most dangerous winger, popping in and out of dangerous positions for Atlanta United’s wildly successful U18 side. He has 10 goals to date, and in stretches he’s been more or less un-guardable on the academy level with his blend of speed and agility in space. In one-on-one situations there’s perhaps nobody you’d least like to lock horns with. Whether Kunga makes it to August still an amateur is maybe the bigger question, but for now he remains a first-ballot choice.

In 2016, we handed the inaugural girls TDS POTY award to Mallory Pugh. Because of Pugh’s grueling national team schedule we weighted her overall ability, pro prospects and YNT form over club form that largely didn’t exist. And thanks to Tagliaferri’s immense talent blended with her time with the U17 WNT at the U17 World Cup in late 2016 could well push her into Pugh’s realm in terms of voting. Because as far as talent goes, Tagliaferri is about as good as it gets on this level. The Colts Neck, NJ native has starred for PDA for years now, and she’s about to take her talents to the next level.

This fall, Tagliaferri, the No. 5 player in the 2017 class, is off to 2015 national champ Penn State. The Nittany Lions built an incredibly robust defensive apparatus over the past couple years, but after Raquel Rodriguez left they’ve struggled to replace that scoring impetus. Tagliaferri is just what the doctor ordered. She once scored four goals in a single U17 WNT game in U17 World Cup qualifying last year, and she’s capable of filling up a scoresheet like few others. The rest of the field has some stiff competition for this award in Tagliaferri this year.