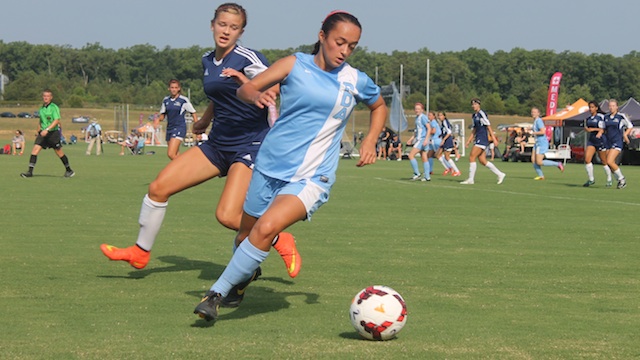 RICHMOND, Virginia — Coming into Monday’s slate of second-round group games, the Eclipse Select U17 side was poised in a precarious place. Two points behind group leaders San Diego Surf, Eclipse needed to defeat the Surf on Monday to have a realistic shot at progressing from a difficult group and into the finals.

Eclipse Select didn’t just win. This was a demolition.

Thanks to a pair of goals in the first half and a second-half goals by Maya Neal and Sydney Griffin, Eclipse Select ran away from Surf 4-1 to take four points into Tuesday’s off day at the ECNL Finals. On Wednesday, Eclipse will need a result against PDA on the final group day, but how big of one will depend on West Coast FC’s battle against Surf. Each of West Coast FC, Surf and Eclipse has a shot at advancing to the U17 title game, as each of those sides is within a point of the other.

But thanks to a surprisingly lopsided battle between two otherwise evenly matched teams, Eclipse is on the brink.

“I thought we were fantastic,” Eclipse Select coach Mike Nesci said. “The overall performance of the players, from our pregame and what we went over to today, to be able to deal with what Surf was going to bring to the game, I thought we did a fantastic job of that.”

Much of the praise goes to the back line, which weathered Surf’s competent attack and top-class attacking midfielder Marley Canales. A Surf attack that put up four in its opener was held to no goals from the run of play, as its final tally came on a Canales penalty kick with just minutes left.

That sure-footedness at the back opened up space for Eclipse to get forward on carefully planned breaks and quick build-ups. They got their first on a 35-yard rocket from Chelsea Burns to rock the attack-minded Surf back on the heels. While Surf futilely attempted to pick its way forward through thick picket lines, Eclipse got another about 10 minutes after their first. Kayla Sharples found a crack of space on the right flank just outside the box and whipped in a cross that found the head of Elizabeth Woerner, who snapped it into the far corner to double the lead.

Neal’s speed and craftiness in the area finished Surf off in the second half.  With about 10 minutes left, she broke clear of a Surf corner and burst into open field some 80 yards from goal. She then went on one of the longest breakaways in ECNL history, finishing her blazing run with a slyly taken goal for a 3-0 lead.

“It was a great result for us,” “Nesci said. “The team played very well and did well in sticking to a game plan and understanding each moment of the game.”

The U16 group at the ECNL Finals carrying the most intrigue is undoubtedly this one, which features three of its four teams from the Dallas Metroplex. The Texans and Sting finished one-two in the Texas Conference during the regular season, so this matchup between crosstown rivals was always going to be one to watch. And after starting the week with a draw, the Texans came out on the positive end of a tightly contested victory.

While Sting struggled to find its way through the muddy Texans back line and link play with striker Lakyn Pope, the Texans had similar trouble creating through talisman Haley Berg. That trouble ended just before the first water break in the first half, as Carina Reyes mashed in a squared cross for a 1-0 lead halfway through the first stanza.

Sting didn’t dial up the pressure until the second half, when chances began to fall a bit more routinely. But through the combined efforts of a locked in back line, Sting’s efforts were routinely blunted. Finally, Texans put the game away via a Michaela Rouse one-time effort one-on-one with the keeper with less than 10 minutes to play. Now, the Texans face already eliminated FC Dallas, and a win coupled with a Slammers draw or loss will put them through to the finals.

This was a see-saw battle from end to end, but PDA gave up its lead and then snatched a goal late to force a draw and keep their hopes of advancement alive.

Just 10 minutes into the game, PDA grabbed its only lead of the game via a wonder goal from midfielder Alexa Ferreira, who threaded a 20-yard boomer into the upper corner. It was an early stamp on a game Ferreira bossed, using her influence to create havoc in the attacking third for the duration of the game. But the lead didn’t last long. WCFC snuck in a goal off a Julie Doyle corner kick to knot the game just minutes later.

It stayed that way until shortly before half, when WCFC capitalized on a loose bouncing ball to take a 2-1 lead into the break. WCFC, though, was gradually pushed back by the goal-seeking PDA attack, and that continual pressure finally paid off with about 15 minutes left in the game.

Zoe Steck connected with a cross for a one-time finish to send the PDA bench into hysterics without much time left. They came close to grabbing three points a few times, but the draw will keep alive their hopes of advancement. Meanwhile, WCFC and PDA are now in the same boat. Both are on two points with a game to go with So Cal Blues frontrunners with a group-leading four. That means both PDA and WCFC will need wins on Wednesday to progress. WCFC will have to go through the Blues to get there, a team that just dumped the Texas Rush 7-1.