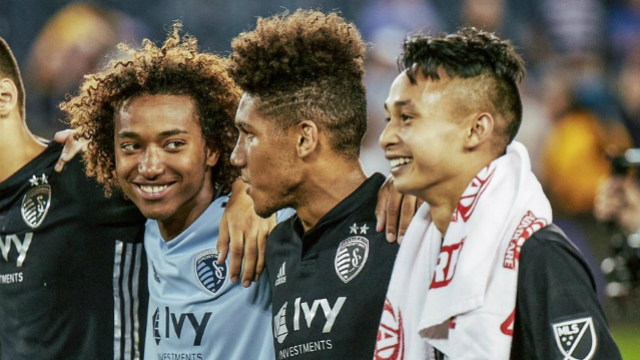 Prior to this year, Sporting KC’s perception of offering younger players minutes was most notable for the ups-and-downs of Erik Palmer-Brown.

Despite investing significantly in its facilities, a USL team (Swope Park Rangers), the path to playing time was difficult for younger players on the SKC roster. Palmer-Brown’s decision to leave on a free transfer for Manchester City underlined the difficulty in getting him minutes.

However, there has been a turning of the tide this season – slowly but surely. And nowhere was that more evident in Wednesday’s U.S. Open Cup matchup between Sporting and Real Salt Lake.

Given the balance that teams need to strike between rotating players mid-week and chasing wins in the Open Cup, it was a vote of confidence nonetheless to see all three players make their first-ever starts for SKC’s first team.

And while none of the three were involved in the goals (Johnny Russell and Kharlton Belmar led the visitors to a 2-0 win against RSL), they showed plenty of promise for the future.

Lindsey was situated in his usual right back spot. But Vermes threw a curveball, opting to use a 5-4-1 shape. That featured a three-man back line, with Lindsey as the right-sided wingback, and a diamond midfield. Busio and Wan Wuzain sat on the right and left of a diamond, with both players looking to win possession and circulate the ball.

While none of the three players provided dazzling moments, their ability to fit into the run of play and set the platform for a victory were all impressive. In the first half, Lindsey made his way past RSL left back Aaron Herrera, setting up Busio for a shot that missed the target.

And even though the U.S. U17 World Cup veteran got forward often, his defensive performance was perhaps a bit more notable. He finished the game with a single clearance (purple), four tackles won (green), one tackle lost (red), five recoveries (orange) and four interceptions (blue). In the midfield, Busio played the full 90 minutes in his first start, while Wan Kuzain was subbed out at the 83 minutes mark. For the latter, Wan Kuzain finished his shift as the left wing back, making way for Gerso Fernandez.

Looking at each player’s passing chart showcases that a lot of went well for Sporting on the night game through the right side. Busio completed 37 of his 43 attempted passes, though as shown below, most of it was about keeping possession, looking to find teammates with a square ball or finding a defender behind him. That’s not to say he didn’t show any ambition at all. In the 33rd minute, he nearly sprung Belmar with a through ball, only to be thwarted by RSL goalkeeper Connor Sparrow.

On the left side of the diamond, Wan Kuzain saw much less of the ball, and by default, the game. This wasn’t necessarily a reflection of how he performed, but rather an indication of how things played out between the two sides. The Malaysian-American finished his 83 minutes after completing 14 of his 16 passing, with nearly all of them backwards or sideways. That’s not a knock on Wan Kuzain, but rather a reminder that he’s a possession-first player that won’t lose the ball.

Atlanta also rotated and handed a start to Andrew Carleton, another U17 World Cup veteran getting a chance in Open Cup action.

After a shaky start to the game against Charleston, Carleton woke the game up with a long-range golazo that stood up as the game-winning goal in a 3-0 win.

Our friend Adam Belz provides the detailed GIFs of Carleton’s performance here. Wednesday’s game also provided a debut for Christopher Goslin, who came in as an 86th minute sub for Ezequiel Barco, while center back Miles Robinson played the full 90.

Other teenagers see the field

Paxton Pomykal played 45 minutes before getting pulled at the half against San Antonio FC; Reggie Cannon played the entire game, while 16-year-old Ethan Bryant came off the bench in stoppage time for San Antonio, which lost 1-0 against their in-state opponents.

While New York City FC once again came up on the losing end against the Red Bulls, James Sands and Joseph Scally both entered the match from the bench. For the latter, it marked his first team debut since signing a contract on March 21. Sands, another member of the U.S. U17 MNT at last year's U17 World Cup, earned his first minutes of the 2018 season in the 4-0 loss.

In Los Angeles, 19-year-old Shaft Brewer made his second appearance in under a week, playing 27 minutes from the bench in LAFC’s 2-0 win against USL side Fresno FC.

Even though Marco Farfan didn’t get any playing time in Portland’s 2-0 win against San Jose on Wednesday night, a handful of domestic younger players did manage to stand out.

Former U.S. U20 forward Jeremy Ebobisse accounted for the game-winning goal. It was a classic Ebobisse goal, and it made a case that the San Jose technical staff didn’t provide a detail scouting report on how to lock him down.

College stars in 2017, Eryk Williamson made his debut for the Timbers first team, getting in 45 minutes, while Foster Langsdorf subbed in for Ebobisse and played 23 minutes.