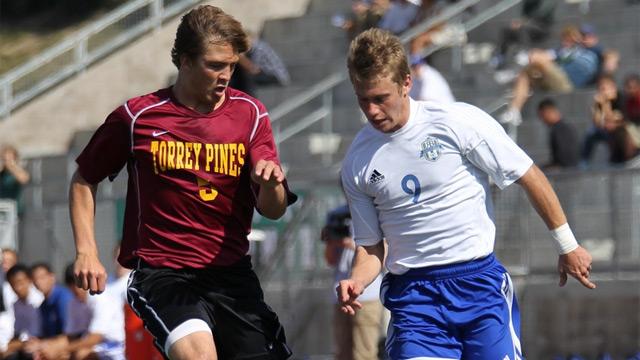 We start today’s Signing Day analysis with a couple of national championship contenders:

Ohio State
Signed: Kenny Cunningham (Internationals), Zach Dobey (Sockers FC), Adam Gorski, Marques Mayoras (Sporting KC), Santiago Velez (Real Colorado), Brady Wahl (Chicago Fire)
Skinny: The Buckeyes have really bolstered the middle of the field with this class as they prepare to again battle it out in the competitive Big Ten. Ohio State has plenty of quality returners in 2011, and these additions should only enhance things. All six of these newcomers could see time in the midfield including Velez, our No. 8 ranked player in the Rocky Mountain and Southwest Region. Velez is a very complete player who can make things happen for himself and his teammates.

Santiago Velez
Mayoras, our No. 12 ranked player in the Heartland Region, has a good tactical understanding of the game while Cunningham (No. 20 in the Great Lakes Region) is a steady facilitator. Dobey and Gorski both bring versatile defensive ability and could help the Buckeyes in a variety of areas.

McKenna is an extremely fast attacking player who has skill and pace in abundance. Ranked No. 41 in our Top 100, McKenna seems to have added strength over the past year which will help him succeed at the next level despite his compact size. McKenna is a natural goal-scorer and play-maker who can provide a spark from the program. Padilla is a goalkeeper arriving from the LA Galaxy along with teammate Schnitman, a midfielder with good size. Schnitman, ranked No. 17 in our Southern California Region, is a good ball-winner and has a nose for the ball. Tenzer is also a goalkeeper who can learn from incumbents Brian Rowe and Earl Edwards in his quest for playing time down the line.

Taylor Stapf
Vermont
Signed: Ben Altneu (Crusader United), Jesse Scheirer, Taylor Stapf (Crossfire Premier), Ryan Bailey (Fusion Soccer Academy), Nick Forsgren, Blake Begnoche (Vermont Soccer Club), Hugo Coimbra (Seneca Soccer Association).
Skinny: The Catamounts addressed their defense with this class. Altneu is not only a solid presence in the back but has good pace going forward and can add a dimension to the attack. Stapf brings good size and understanding to the back line and has served as a captain and team leader. Goalkeeper Bailey brings his 6-foot-3 frame and a lot of natural ability to the net. Vermont returns much of its core from last season and will by vying to move up the America East Conference.

The Eagles will have newcomers at every position including Ugandan midfielder/defender Mawanda who could make an immediate impact. Matutu played on the Zimbabwe U-20 Team, while Matthews is another goal-scorer who can create for the team. It’s a big, diverse class, and much will depend on which players can adapt quickly.
Related: Players To Watch,