Sarah Killion first received looks from UCLA when she was in the seventh grade. So even before she was our No. 9 ranked player in the 2011 class, she was kind of a big soccer deal.

Of course, UCLA was not allowed to reach out to contact the Fort Wayne Fever standout in any way back then, but they did speak with her coach and the two-way interest resulted in her making a verbal commitment after her freshman year in high school.

It wasn’t quite that simple for Lauren Bohaboy, who is the No. 5 talent in the nation. The So Cal Blues starlet went on eight unofficial visits while gathering information that would ultimately help her reach a final conclusion. 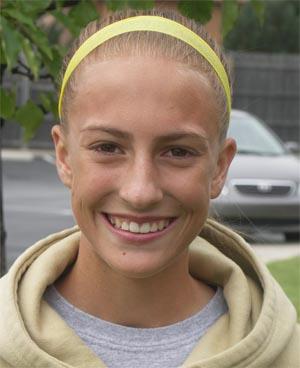 Sarah Killion
Her last visit was to Notre Dame. The Fighting Irish had her at hello.

“I knew from the minute that I stepped on campus that was where I wanted to go,” she said. “I think that taking the visits was the most important part of the recruiting process for me and really helped me make my decision. And a lot of them were a lot of fun.”

Eriq Zavaleta, who stands at No. 6 in our boys Top 100 Ranking, had a few interesting dilemmas during his recruiting process.

For starters, he was in U.S. U17 Men’s National Team Residency and playing with the likes of Boyd Okwuono, Luis Gil, William Packwood, Nicholas Palodichuk and Alex Shinsky, so it wasn’t like he had all the time in the world to embark on a college tour. So he fit in a few on his trips home and eventually decided he wanted to stay instate.

Funny enough, Zavaleta, who is from Westfield, Indiana, has ties to the West Coast – his father, Carlos Zavaleta, and uncle Greg Vanney are both former UCLA players who are commemorated in the Bruins Hall of Fame.

California was a little too far for Eriq, so he settled on Akron or Indiana.

“I met (Akron coach) Caleb Porter and he is such a great coach and an even better guy,” Zavaleta said. “Ever since I was a little kid I had the dream of going to Indiana, so they kind of had a leg up on everyone.”

So the Hoosiers it was.

And the moral of the story, you ask?

Get discovered young; take visits and stay home … or, not.

We’ll let the stars do the advice giving.

“Do not feel pressured to commit early,” Bohaboy said. “Make a short list of the schools that you are interested in and visit them all before you make your decision so that you can compare all of your visits.”

“Take your time. It’s a cool and exciting thing to have coaches constantly reaching out to you, but you have to make sure you don't make a decision too quickly. This is possibly a four-year commitment and you want to be happy with where you are going. Finally, get to know the coaches of the schools you are looking at. If a coach wants to get to know you as a person, as more than just a soccer player, that's a great sign.”

“Set a goal, go after it, and don't stop until you get there. Make sure to explore all parts of the school, because besides playing your sport there you also have to live there for four years … and go to class!”
Related: Players To Watch,
Headlines
Club Rankings HQ
View all rankings >>